Home Inventing the Future of Engineering - About Us Dean's Office About The Dean Fotis Sotiropoulos, Dean 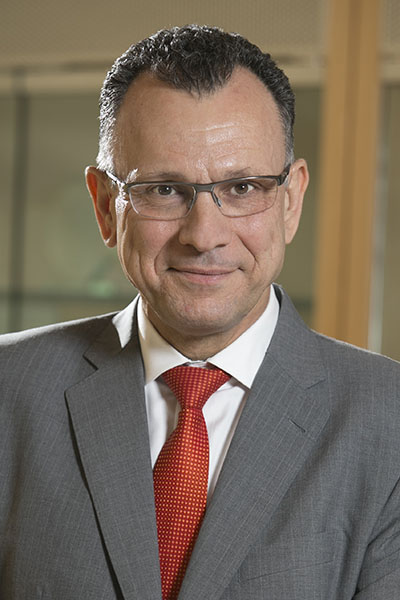 Fotis Sotiropoulos is Dean of the College of Engineering and Applied Sciences and SUNY Distinguished Professor of Civil Engineering, effective October 15, 2015. He served as Interim Provost and Senior Vice President for Academic Affairs for Stony Brook University from October 2020 to March 2021.

Prior to joining Stony Brook, Dean Sotiropoulos was the James L. Record Professor of Civil, Environmental and Geo-Engineering; Director of the St. Anthony Falls Laboratory; and Director of the EOLOS wind energy research consortium at the University of Minnesota, Twin Cities. Prior to that, he was on the faculty of the School of Civil and Environmental Engineering at the Georgia Institute of Technology, with a joint appointment in the G. W. Woodruff School of Mechanical Engineering.

His research focuses on simulation-based engineering science for fluid mechanics, problems in renewable energy, environmental, biological, and cardiovascular applications. Funded by the National Science Foundation, the Department of Energy, the National Institutes of Health, the Sandia National Laboratories, private industry, and other state and federal agencies, Dean Sotiropoulos has raised over $35M for research and research facility development and renovation. He has authored over 170 peer reviewed journal papers and book chapters and his research results have been featured on the cover of several prestigious journals.

In 2017, he was named a SUNY Distinguished Professor and received the Hunter Rouse Hydraulic Engineering Award from the American Society of Civil Engineers.  Dean Sotiropoulos  is a Fellow of the American Society of Mechanical Engineers (ASME) and the American Physical Society (APS), has twice won the APS Division of Fluid Dynamics Gallery of Fluid Motion (2009, 2011), and is also a recipient of a Career Award from the National Science Foundation. He is also a 2014 distinguished lecturer of the Mortimer and Raymond Sackler Institute of Advanced Studies at Tel Aviv University and is serving or has served on the editorial boards of several journals.