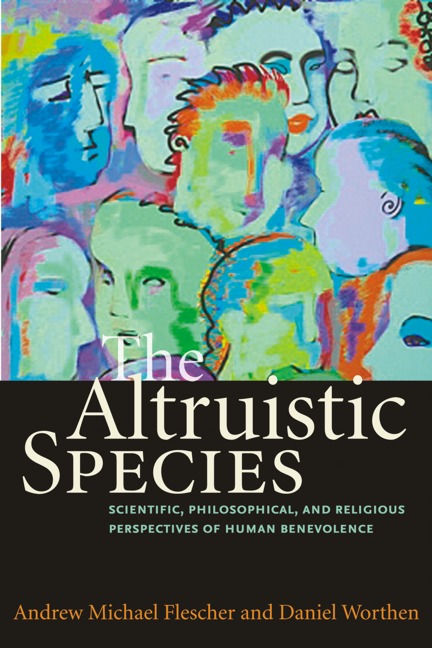 The topic of altruism has recently become of considerable interest to scholars in fields as diverse as philosophy, religious studies, psychology, sociology, economics, and biology; however, while there are a multitude of sources that cover altruism from each of these perspectives, there has not yet appeared a single introductory volume that adequately covers the phenomenon of altruism from all of these disciplinary vantage points. This volume is intended to fill that gap in the literature. It provides a way of understanding the phenomenon of altruism that takes seriously the insider testimony of the altruist herself, while also managing to incorporate explanatory theories from several disciplines into a comprehensive account.

We argue that altruism is a genuine phenomenon; other-regarding behaviors are not   merely  instances of self-interest in disguise. At the same time, we believe that there are important kernels of truth in biological, sociological, psychological, economic, and finally philosophical and religious theories for accounting for selflessness, and that they furthermore represent pieces of a larger puzzle that can be synthesized to contribute to a coherent, truly interdisciplinary account of the phenomenon.   The Altruistic Species  aspires not only to introduce students and general readers to the major theories from different fields that have been advanced to explain the mystery of altruistic conduct, but also to propose an equally accessible argument of our own that integrates these classic approaches in a new way. The book is significant in its attention to   humanaltruism. Selflessness in the animal kingdom, which plausibly can be explained through exclusive reference to the theories of kin selection and reciprocal altruism from the field of evolutionary biology, is an occurrence that becomes significantly more complex in the human situation. Indeed, in the human case distinctively, we show that “nurture” works from the limits of “nature,” through human beings availing themselves of philosophical and religious traditions in order to "expand their circles" of concern. An interdisciplinary approach to understanding human altruism is thus not motivated merely by the egalitarian desire to be ecumenical, but rather by a genuine conviction that no one discipline or perspective is able to provide an adequate explanatory framework for grasping this particular phenomenon.

"Flescher and Worthen have produced a remarkable analysis of major scientific, ethical, and religious approaches to benevolence and pro-social behavoir. This work displays a balanced answer to psychological egoism that recognizes the legitimacy of proper self-love while at the same time maintaining a strong justification for an ethic of responsibility for others. It will be read by every serious scholar of moral psychology, social ethics, and virtue theory, and it ought to be read by anyone who is seriously concerned about living the ethically good life. "
—Stephen J. Pope, Boston College