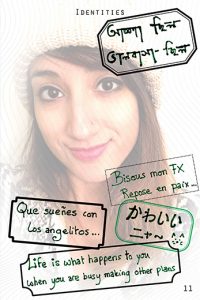 JASNA BOUDARD is an international multidisciplinary artist. Her artistic practice explores visual nuances of movement, light, and space, focusing on the human body and its extensions. Her work is often diaristic, revealing the experiential and interactive process of creation. She works intuitively by engaging and reacting to lived moments and uses the camera and other mediums to produce “dream-like” reality. She frequently features performers, capturing their bodies in motion and highlighting the beauty of flow. This practice has led her to transform her visual work into immersive movement-based experiences. Jasna is half French / half Bangladeshi, and has migrated extensively throughout the world. She lived in Paris, Tangiers, Dhaka, Dallas, Barcelona, Tokyo, and is currently based in New York City where she is pursuing her MFA at Stony Brook University.