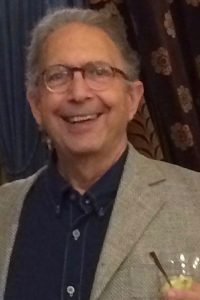 James H. Rubin is one of the world’s foremost specialists in the history, theory and criticism of nineteenth century European Art, especially that of France. He teaches courses at the graduate and undergraduate level. His interests are interdisciplinary, with special attention to cultural history, art and politics, and art and philosophy. He was educated at Phillips Andover, Yale (B.A.), Harvard (PhD), and the Institut d’Art et d’Archéologie of the Sorbonne in Paris (license ès lettres). He has taught at Harvard, Boston University, Princeton and the Cooper Union.

He has published over seventy articles and essays on subjects ranging from the eighteenth century to the present. He has given over eighty public lectures in North America, Western and Eastern Europe, and Asia. He is the author (and in one case editor) of thirteen published books: Eighteenth Century French Life-Drawing (1977); Realism and Social Vision in Courbet and Proudhon (1981); Eugène Delacroix’s ‘Dantebarke’ (1987); Manet’s Silence and the Poetics of Bouquets (1994); Courbet, Art and Ideas (1997); Impressionism, Art and Ideas (1999); Nadar (2001); Impressionist Cats and Dogs: Pets in the Painting of Modern Life (2003); Impressionism and the Modern Landscape: Productivity, Technology and Urbanization from Manet to Van Gogh (2008); Manet: Initial M, Hand and Eye (2010); Realism and Music: Courbet, Berlioz, Wagner and Relations between the Arts in Nineteenth-Century France (2012, e-book); How to Read Impressionism: Ways of Looking (2013); and (edited) Rival Sisters: Art and Music at the Birth of Modernism, 1815-1915 (2014). He has two books forthcoming in 2020: Monet (World of Art by Thames and Hudson) and Why Monet Matters: Meanings Among the Lily Pads (Penn State University Press).

He has served on the International Committee of the College Art Association and represented the CAA at the United Nations. He is a member and Vice-President of the Société Paul Cézanne, based in Aix-en-Provence, France. At Stony Brook, he is an affiliate of the Department of European Languages and the Department of Philosophy. Among his awards, most recently he was the winner of a National Endowment of the Humanities Public Scholar Fellowship, which he held for the calendar year 2016. He travels frequently, speaks fluent French, and lives in New York City and Mittelbergheim, Alsace.

Professor Rubin will take his full retirement in May 2020.