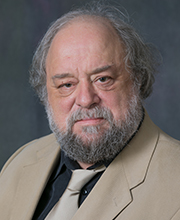 Alexander Zamolodchikov is an exceptional and internationally-recognized scholar, most known for his contributions to the study of condensed matter physics, conformal field theory and string theory. Since receiving his PhD from the Institute for Theoretical and Experimental Physics in Moscow, Russia, Dr. Zamolodchikov was a senior researcher at the Landau Institute, and most recently before coming to the State University of New York at Stony Brook, a Board of Governors Professor of Physics at Rutgers University.

The impact of Dr. Zamolodchikov’s work is reflected in the number of times it has been cited — over 18,000 as reported by the Stanford-based website, “Inspire” — including five papers with over 1,000 citations each. He is the recipient of significant honors including the American Physical Society’s Dannie Heineman Prize for mathematical physics in 1999, and in 2011, both the Dirac Medal of the International Center for Theoretical Physics (ICTP) and the American Physical Society’s Lars Onsager Prize for statistical mechanics. In 2012, he received a Guggenheim Fellowship and was elected to the American Academy of Arts and Sciences. He won the Pomeranchuk Prize of the Institute of Theoretical and Experimental Physics, Moscow in 2014. Most recently, in 2016, Dr. Zamolodchikov was elected to the National Academy of Sciences.

Dr. Zamolodchikov is a pioneer in modern theoretical physics and his research has been supported continuously by the United States Department of Energy. As the Yang Chen Ning – Deng Wei Endowed Chair, Dr. Zamolodchikov will expand his work on integrable quantum field theories, with the emphasis on relation between large-distance properties encoded in the S-matrix, and the short distance structures. He will also work on applications of conformal and integrable field theories to low dimensional systems in condensed matter theory. In his work on integrability, Dr. Zamolodchikov plans to collaborate closely with other members of Stony Brook’s C.N. Yang Institute. At the same time, he will continue work with mathematical physicists at Stony Brook’s Simons Center for Geometry and Physics on conformal theories, and with scientists at Rutgers University, the Landau Institute in Russia, and Weizmann Institute in Israel.