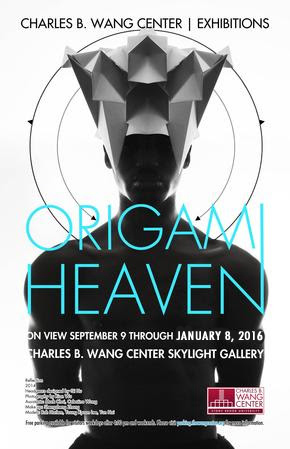 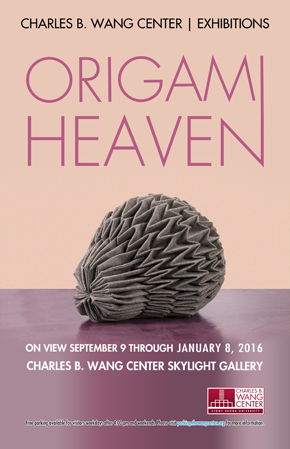 This exhibition was a part of Tour 1 of the Art Crawl: A Guided Tour of Campus Galleries on Thursday, September 10, 2015 with a lecture by Hiroshi Hayakawa.

LECTURE
Origami and the Making of Between the Folds
Wednesday, September 9, 2015 at 5 PM
Charles B. Wang Center Theatre

FILM
Between the Folds directed by Vanessa Gould
On View September 9 to December 31, 2015
Charles B. Wang Center Video Gallery 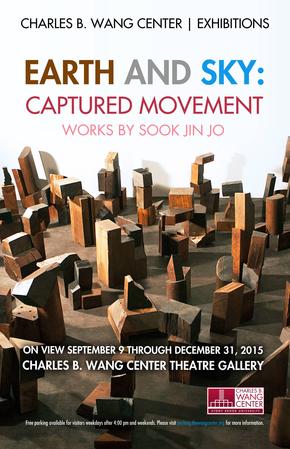 Korean American artist Sook Jin Jo is a multidisciplinary artist who uses found materials such as wood from discarded furniture that resonates with its previous history. Her interconnected themes include — space and form, destruction and rebirth, the material and the spiritual as well as life and death. Inspired by a recent artist’s residency in Shanghai, Jo’s new series of black paintings explores the iconographies of clouds from traditional Chinese painting by contemplating the current air pollution and complexity of the metropolis.

Read the FronteraD review of this exhibition by Jonathan Goodman: Sook Jin Jo: Approaching the Mystery of Things 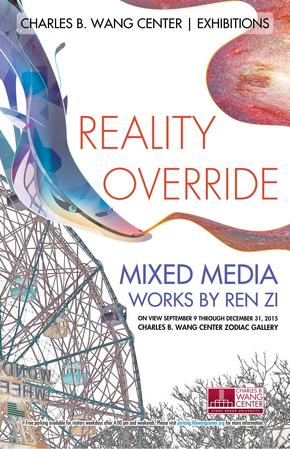 In celebration of Singapore's 50th anniversary of Independence, the Charles B. Wang Center highlights the a multitude of Singaporean cultural themes with the artist Ren Zi. Zi is a self-taught digital media artist who uses nature, his personal memories and Singapore’s transformation as inspiration for his art. Ren Zi investigates the malleability of memory and our internal reality by citing phenomenological psychology and Buddhist and Taoist philosophies. Ren Zi prints on a wide range of materials including acrylic, aluminum and bamboo paper. This is Zi's first exhibition in the United States and the result of his six month artist residency at Nars Foundation in Brooklyn. Zi has exhibited in Singapore at Ion Art Gallery, Instinc Gallery and Volvo Art Loft.

This exhibition was a part of Tour 2 of the Art Crawl: A Guided Tour of Campus Galleries on Wednesday, November 18, 2015.

LECTURE
A Contemporary Art Practice from a Trans-Asian Perspective
Thursday, September 10, 2015 at 2:30 PM
Charles B. Wang Center Lecture Hall I 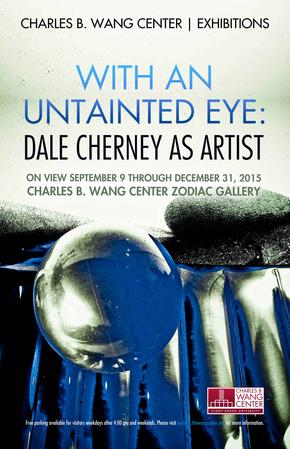 Dale Cherney was an artist who carefully examined the everyday and familiar from a perspective that was anything but. Throughout her career she created bold original forms that explored the contrast of movement amid stillness.

Born in 1985, Dale Cherney began her art as a young child, winning many art contests from elementary school through high school. She studied art as an undergraduate at Cornell University where her photography was published in Untitled Magazine’s Surreal series, April 2006.

Cherney's photographs have been showcased at Cornell’s Alice Cook House as well as its Johnson Museum of Art. Dale did fashion photography and promotional advertising work for the artist Bob Daniels, as well as created CD covers for several musical groups.

In 2012 Dale Cherney came to Stony Brook University, where she continued her art studies. Sadly, on June 3, 2015, Cherney passed away from complications of schizophrenia.

Wonju Seo is a Korean-­American artist whose primary medium for the past 12 years has been textiles. This exhibition introduces Seo's contemporary textile work, which is inspired by Korean patchwork called pojagi, to the Stony Brook University Hospital and the public. Pojagi is a centuries­-old traditional Korean form of cloth used to wrap gifts, to cover food tables and to carry objects of everyday life.

Originally pojagi were made from small pieces of silk that had been discarded after the process of making garments. Since fabric and textiles were incredibly valuable in early Chosŏn Korea (1392-­1910), the cutting of fabric for any other reason than making clothing was considered highly wasteful, even disgraceful. In this context, the process of combining fabric remnants and sewing them together into pojagi for a new household purpose was seen as an auspicious act by Korean women. Not only did it demonstrate their frugality and patience, but every stitch could be seen as the expression of a woman's devotion to the comfort and well­being of her family.

Wonju Seo's Wrapping with Blessings showcases pojagi's fundamental functions and captures the way in which the traditional, practical and spiritual Korean values inherent in the pojagi can be reborn in our contemporary age. The geometric blue color patchworks and thorough stitching can be seen as the expression of Ms. Seo's devotion to the comfort and well­being of the audience.

This exhibition is curated by Jinyoung Jin, Associate Director of Cultural Programs at the Charles B. Wang Center and organized by the School of Medicine

Courtesy of National Museum of PreHistory of Taiwan

Celebrating precious traditions and the culture of baby carriers from Taiwan and Southwestern China, Love and Blessings: The Art of Baby Carriers presents intricately crafted objects with rich cultural symbolic meanings. Traditionally a gift from the mother’s branch of the family, these carriers are seen as a vessel of memories and blessings for the child. Each stitch and thread of embroidery work on baby carriers is a deep expression of a mother’s affection and devotion to her child.

All works are loan from National Museum of PreHistory in Taiwan,  Collection of Vichai and Lee Chinalai, Dr. David D. Stein and Dr. Phyllis A. Kempner. This exhibition is sponsored by the Ministry of Culture of the Republic of China (Taiwan), the Hanlin Chinese Culture Association, and the Confucius Institute at Stony Brook University; Organized by independent curator Taini Hsu and Jinyoung Jin, Associate Director of Cultural Programs at the Charles B. Wang Center.

Critically acclaimed artist Jiro Osuga visualizes Japanese daily modern life. Images of every sort are depicted and examined in Osuga’s exuberantly expressive works. The Everyday Joys of Japan offers a pathway for audiences to become avid travelers and knowledgeable readers of images.  Osuga was born in Tokyo and currently lives in U.K.

Featuring finely cut prints of Tibetan Buddha, protective deities and tara from the Derge Parkhang (/deh-gay par-kahng/),  the exhibition introduces Derge Parkhang, one of the foremost cultural, social, religious and historical institutions in Tibet. Derge Parkhang is founded in 1729 by Denba Tseren and still remains an active center for publication and distribution of Buddhist texts. The exhibition opens a window into the fascinating beliefs, symbols and learning of Tibetan Buddhism. Photographs and video introduce the people of Derge who have preserved and revived the Parkhang’s position as one of the most precious pearls of Tibet’s living culture.

This exhibition is the first authorized exhibition of works from the Derge Parkhang in the U. S.

Photo (right): This print is a Tsok Shing, an Assembly Tree that represents all the Buddhas, bodhisattvas, deities, and lamas who are members of a particular lineage. Tsok means accumulation of merit and accumulation of wisdom, and Shing means object. So it becomes object of accumulation, not just a creation of your imagination. In this print Indian scholars (who do not wear vests on their upper bodies), Tibetan scholars and lamas from all schools appear together in the tree around Amitabha. Ecumenism was a hallmark of the religious patronage of the Derge Kings. Avalokiteshvara and her emanations appear just below and to the right of the Buddha, and on his left is Sakyamuni surrounded by bodhisattvas. The White Droma is seated below him.

Drawn from the Jack G. Shaheen Archive at New York University, A is for Arab: Archiving Stereotypes in U.S. Popular Culture, examines representations of Arabs and Muslims in U.S. popular culture from the early twentieth century to the present. Often featuring anti-Arab and anti-Muslim depictions, the exhibition provides editorial cartoons, advertisements, books, magazines, comic books, toys, and games, as well as moving images from motion pictures, cartoons, newsreels, and televisions programs. Providing historical context about these images, the exhibition aims to educate and stimulate discussion about the impact of stereotypes on both individual perceptions and national policy.

Access to Any End of the Earth is the site-specific installation by MFA student Logan Marks at Stony Brook University. The work suggests an imagined entryway into the distant and diverse places, from which many of us come from. Using line work based on traditional patterns from across Asia and techniques portraying atmospheric perspective, the work arrives at a deeper place both emotionally and physically.

This work gives students and visitors on campus an illusory entry into homes that, now, exist only in the hearts and minds of those at Stony Brook. By stretching out the traditional dimensional confines and utilizing the characteristics of the existing space, Access to Any End of the Earth provides an illimitable expanse for the imagination of the viewer.