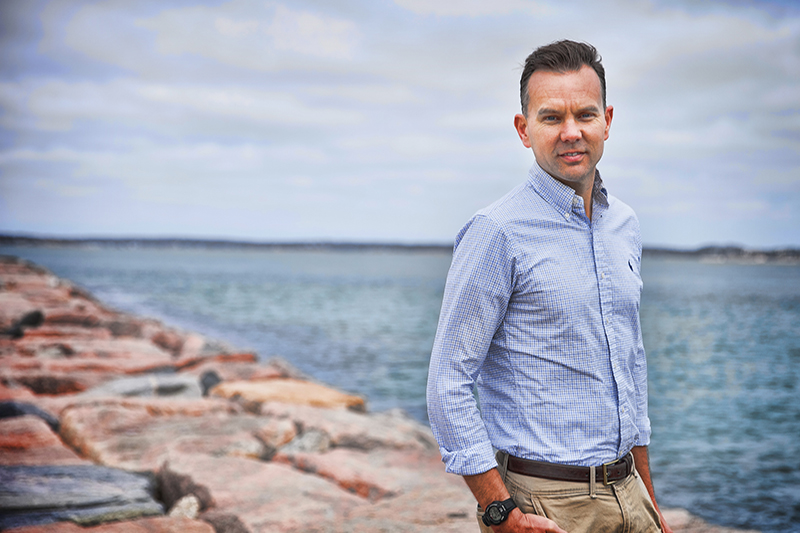 As a professor in Stony Brook’s School of Marine and Atmospheric Sciences, Christopher Gobler trains the next generation of marine scientists to tackle the challenges that face coastal ecosystems on Long Island and around the world.

And, as he works with students and colleagues on answers to those challenges, Gobler often recalls his own days as a student, when there were no answers, just questions.

“One summer, I worked for an environmental group on Long Island,” Gobler said, “and they had a guest speaker who was a bayman. He was a fourth-generation bayman and he had always assumed his son would be the fifth generation.  But he was getting out, and his son wasn’t going to be able to be a bayman either, because this thing called the brown tide came, and the whole population of clams in the Great South Bay collapsed.”

“I asked the bayman,” Gobler recalled, “‘What’s the brown tide? What causes it?’ He said, ‘I don’t know, and it doesn’t matter, because I’m getting out.’ For me, understanding the problem has been my motivation ever since.”

In the nearly three decades since, Gobler has gone from understanding the cause of brown tide – algal blooms that flourish in shallow, poorly flushed and nitrogen-rich areas – to investigating, designing and implementing strategies to solve the problem. Along the way, he found a home at Stony Brook, where the resources of a world-class research university have facilitated his work in ways that would not be possible elsewhere.

“Obviously, Stony Brook has extraordinary on-the-water resources at the Marine Science Center in Southampton,” Gobler said, “but at the same time, we have the resources of a major research university on the main campus. Things like genomic sequencing, the flow cytometry lab and electron microscopy are all accessible to me because I’m at Stony Brook.”

Now, as the inaugural holder of the Endowed Chair in Coastal Ecology and Conservation, Gobler can pursue solutions to the challenges facing Long Island and the world like never before.

“Chris Gobler’s work has put him at the forefront of the effort to preserve and protect coastal ecosystems on Long Island and around the world,” said Stony Brook University President Samuel L. Stanley Jr. “This endowed chair ensures that Stony Brook’s School of Marine and Atmospheric Science will continue to lead through impactful research and bold initiatives to address the environmental challenges we face.”

“Having the endowed chair allows me to pursue high-risk, high-reward research and science,” Gobler said. “If I find something and I’ve got a hunch that there is something really important and groundbreaking to be discovered, I won’t need to wait to write a grant to get funding to do that research. With the funds from the endowed chair, I’ll be able to tackle that research right away.”

For Jane and Alfred Ross, experiencing Gobler’s work in leading the Georgica Pond Project reinforced the need for an endowed chair of this type. The longtime friends of the School of Marine and Atmospheric Sciences (SoMAS) launched the effort to establish the endowed chair with a major gift.

A large portion of the funding for the endowed chair also came from Helaine Lerner, President of the GRACE Communications Foundation, a longtime supporter of Gobler’s work and a part-time East End resident. For Lerner, it was important to ensure that the endowed chair became a reality, so putting financial backing behind Gobler’s instincts was an easy decision.

“For as long as I’ve known Chris Gobler,” Lerner said, “he has demonstrated outstanding scientific instincts, and an infectious passion for environmental protection and preservation that he passes on to his students.”

For Gobler, having the support of donors like the Rosses, Lerner, and a third longtime backer who contributed anonymously means more than votes of confidence. It means he has partners.

“I look at what I’m doing as a partnership,” Gobler said. “What they’ve contributed is just as important as the science. These are people who are highly committed to protecting Long Island’s coastal ecosystems and see this research as an important avenue for achieving that end.”

And, while the primary focus of the research is Long Island, the supporters of the new endowed chair are proud to champion work with a truly global impact.

“The work done at Stony Brook has a global reach,” Ross said, “and it’s really exciting to see that research have an impact right here in our backyard.”

For Lerner, funding the endowed chair makes for a personal approach to the global issues at the heart of her advocacy.

“It’s been a privilege to watch Chris Gobler’s career unfold,” Lerner said, “and to witness firsthand the impact of his research on our Long Island ecosystems. Funding this endowed chair ensures that this vital work will continue for years to come, and I’m looking forward to seeing the benefits of this research realized on Long Island and in coastal ecosystems around the world.”

“Giving purposeful researchers like Chris Gobler access to the funding they need to follow their instincts is the driver for innovation,” said Dexter A. Bailey Jr., senior vice president for University Advancement. “Endowed chairs provide recognition to Stony Brook faculty who are making a meaningful impact in teaching, research and scholarship. We are immensely grateful to the generous friends of the University who show such confidence in us.”

As Gobler looks ahead, he sees a lifetime of work to do, and the resources to make it possible.

“The unanswered questions are still there,” Gobler said. “This endowed chair will give me the flexibility to pursue new directions for answering those questions, and the resources to explore tools and techniques that are critically important for protecting marine ecosystems.”

Funding for the Endowed Chair in Coastal Ecology and Conservation counts toward the $600 million Campaign for Stony Brook University, the largest in SUNY history. For more information visit stonybrook.edu/campaign.