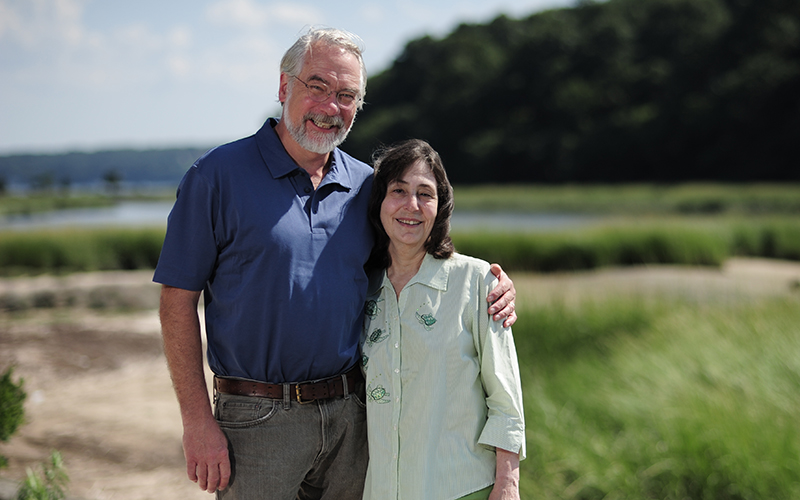 The goal of the Shinnecock Bay Restoration Program is to use science, outreach and partnerships to restore the water quality and fisheries of Shinnecock Bay. The bay is the eastern-most lagoon along New York’s South Shore Estuary system. Its aquatic environment — 9,000 acres of open water, salt marshes and intertidal flats — forms a regionally significant habitat for fish shellfish, and waterfowl.

“This generous gift from the Landeau Foundation and the matching funds from the Simons Foundation will help restore Shinnecock Bay to the healthy and productive state it once enjoyed and, ultimately, serve as template for similar projects worldwide,” said Samuel L. Stanley Jr., M.D., President, Stony Brook University. “We hope that it will also serve as a catalyst for additional gifts for this project from those who share a vision for the restoration of such vital marine estuaries.”

During more than a decade of research in Shinnecock Bay, SoMAS scientists have documented the decline in the Bay’s water quality, shellfish populations and seagrass habitats. Using information acquired during Shinnecock Bay Restoration Program pilot studies which began in 2010, Stony Brook University scientists identified the reasons for those declines as well as approaches on how to reverse these trends and improve the ecological condition of this system. Through these pilot studies, researchers identified which species or strains of shellfish or eelgrass will be best suited to help restore Shinnecock Bay.

Laurie Landeau of Northport, an aquatic animal veterinarian, and her husband, Bob Maze, a PhD in ecological parasitology, became aware of the restoration project in Shinnecock Bay when they came to Stony Brook Southampton as invited faculty to offer a four-week “AQUAVET” course (Introduction to Aquatic Veterinary Medicine). It was there that they learned of the unique opportunity to impact the marine estuary environment guided by the research and work of prolific marine scientist Christopher Gobler and his team of Marine Science faculty, post docs, graduate students and undergraduates.

Landeau and Maze also operate Marinetics on the Eastern Shore of Maryland, which raises oysters in rafts on the surface of the Choptank River. Over-harvesting and degradation of the Chesapeake’s ecosystem had virtually wiped out the wild oyster population there. Marinetics began as a commercial aquaculture company with a mission to produce a high quality oyster that is healthier for the consumer, while also helping to improve the health of the Chesapeake Bay. Now operating as The Choptank Oyster Company, it has grown into a thriving oyster farm that produces an average of 1 to 2 million oysters per year.

“Bob and I learned firsthand that like Chesapeake Bay, Shinnecock Bay has seen its once-rich ecosystem devastated,” said Landeau. “We’re confident that this project will restore the delicate environmental balance needed to sustain a rich diversity of life in Shinnecock Bay. The marine environment was important to my parents, Ralph and Claire Landau, and I am delighted to continue their legacy through guiding their Foundation in support of this comprehensive project.”

“If the Shinnecock project is successful, it could restore not only the ecosystems to the bay but also the livelihoods of the baymen who harvested its shellfish for generations,” said Maze. “And if it can happen in Shinnecock, it has potential to be reproduced on a larger scale in parts of the Chesapeake system and in other estuaries worldwide.”

“We applaud the Landeau Foundation’s vision in supporting the Shinnecock Bay restoration project,” said Marilyn Hawrys Simons, Ph.D., President of the Simons Foundation, which in December 2011 announced a $50 million Challenge Grant that accompanied a $100 million personal gift to Stony Brook University from Jim and Marilyn Simons. The Challenge Grant was dedicated to inspire and encourage others to invest in the future of Stony Brook University. “The Simons Foundation is delighted to add its help to this important project.”

Heading the efforts to restore the Bay for SoMAS are Gobler, whose research focuses on aquatic ecosystems and how their functioning can be effected by man or can affect man, and marine biologist Ellen Pikitch, Professor and Executive Director of the Institute for Ocean Conservation Science in the School of Marine and Atmospheric Sciences at Stony Brook, whose research is focused on ocean conservation, fisheries management, ecosystem-based approaches, endangered fishes, sharks and sturgeon.

“Overfishing, decreased water quality and the intensifying algae blooms have all but wiped out the once-thriving hard clam fishery in western Shinnecock Bay,” said Gobler. “The pilot studies undertaken by SoMAS during the summers of 2010 and 2011 have provided valuable information to inform future restoration projects. The goal is to eventually reach a ‘tipping point’ where the natural populations of shellfish will begin to recover and eelgrass beds will expand within Shinnecock Bay.”

“The hope is that once the shellfish populations reach sufficient densities, they will become self-sustaining and expand,” said Pikitch. “It is our expectation that long-term and consistent monitoring can be incorporated into existing SoMAS undergraduate courses on the Stony Brook Southampton campus. We are also confident that outreach efforts undertaken throughout this project, including partnerships with other organizations, will lead to sustained advocacy efforts to protect the bay over the long term.”

“We are grateful for the research that these Stony Brook University scientists have conducted to identify the causes of decline in the Shinnecock Bay,” said Congressman Tim Bishop. “Their work has drawn a road map by illustrating what steps need to be taken to restore this waterway to the thriving ecosystem for fish and shellfish that it once was. Healthy waterways are vital to our community’s marine life and our economy, and we deeply appreciate this generous gift from the Landeau and Simons Foundations.”

“This research and restoration initiative will not only rehabilitate this waterway, but will serve as a model for other communities who have seen similar decline in their estuaries. The partnership of community, science and philanthropy will have far-reaching benefits,” said Senator Kenneth P. LaValle. “The health of this waterway is connected to the health of our community. We need a thriving waterway to support a thriving economy, tourism and recreational activity.”

Assemblyman Fred Thiele stated, “Shinnecock Bay is a valuable and unique economic and environmental resource here on the East End. The Marine Science Program is playing an active role in developing a restoration plan to ensure that we will continue to benefit from the Bay and its resources. This tremendous gift will enable the Stony Brook Southampton Campus to play a significant role in addressing local issues. I look forward to seeing the University expand its role in the community.”