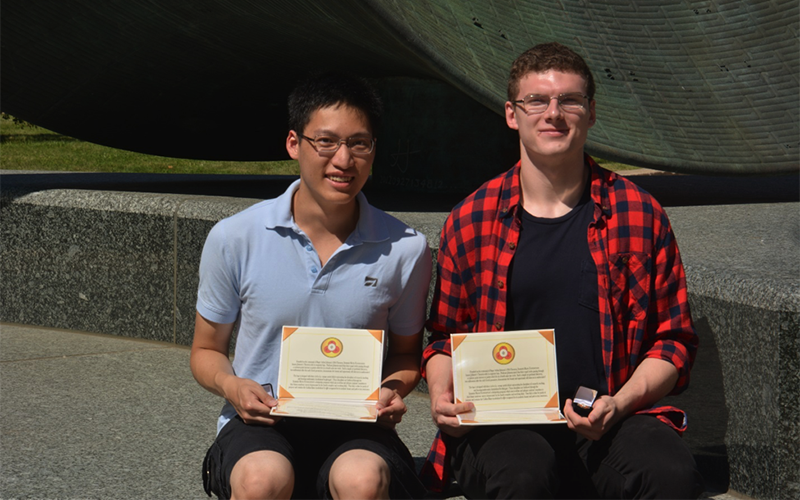 Stony Brook University students graduate with an average of $6,000 less in debt than other public university students do — a remarkable fact considering that 67 percent come from families who make less than $75,000 a year. They bring ambition and a studious mind, but it is scholarships, awards and other aid that make it possible for Stony Brook students to succeed far beyond the expected. Minh Nguyen, Class of 2018, knows the difference a scholarship can make.

By his sophomore year on campus, Minh’s teachers were noticing his exceptional talent in mathematics and his potential to influence the field. “He is among the two best undergraduate students I have encountered during my thirty years of teaching,” Stony Brook University Professor Moira Chas said about Minh. In early 2016, during the second half of his sophomore year, Minh saw the posting for the Summer Math Scholarship — full tuition, housing and food to conduct independent math research over the summer. “I wanted to keep doing math,” Minh said. 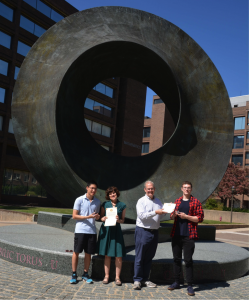 The Summer Math Foundation’s Summer Math Scholarship provides support for a sophomore or junior student to advance their knowledge outside the traditional classroom experience to help prepare them for graduate school and a dedicated career in mathematics. “This funding allows promising students to have one-on-one research interaction with a faculty mentor over the summer without sacrificing financially,” notes Mathematics Department Chair Robert Lazarsfeld. “We are so grateful to the Summer Math Foundation for recognizing the importance of undergraduate research experiences and its positive correlation with success in graduate school.”

Minh’s mentor, Professor Chas, recalls him coming to her in March 2016 for guidance on choosing a research topic for the scholarship application. “I gave him a few basic readings which he devoured with no difficulty.” Chas wrote Minh a letter of recommendation for the scholarship application and it was gratifying when he was accepted. “I knew it would allow him to expand his understanding of mathematics and produce interesting results,” Chas said. “And that is exactly what happened. During the summer he was supported by the Summer Math Foundation, Minh found non-trivial ideals using an interesting algebraic method.”

The endowed Summer Math Scholarship and other generous funding from the private, non-operating foundation gives mathematics students the kind of early-career assistance that is often hard to come by. “Every year we have mathematics majors who wish to pursue summer research but can’t afford not to work,” said Lazarsfeld. Last summer’s recipient, Hubert Puszklewicz, Class of 2019, was selected based on his proposed research to explore a relatively new algebraic structure related to the intersection of curves on surfaces. “This is an area that has seen a great deal of progress in the last few decades, but there are still many open questions,” Chas said. “It’s a rewarding investment in these promising students,” notes the Summer Math Foundation Managing Director. “The prominent reputation of Stony Brook University’s math department and the success of their students is a natural fit for the scholarship program.”

At Stony Brook, students are the number one priority, and with the help of scholarships and other financial assistance, they have the tools to succeed without crippling debt. In striking confirmation of Stony Brook University’s capacity to provide students a clear pathway to success, a study led by the Stanford Institute for Economic Policy Research ranks Stony Brook University #1 for overall upward social mobility.

The study: Mobility Report Cards: The Role of Colleges in Intergenerational Mobility recognizes Stony Brook among the top colleges and universities in the nation whose students enter college at the bottom fifth of the income distribution and go on to earn in the top three-fifths of income distribution. This means Stony Brook University students have the highest likelihood of moving up two or three income brackets compared with other prestigious public research universities. Scholarships help make this achievement possible and strengthen Stony Brook University’s reputation for educational excellence at a great value.

Nearly 44,000 people have given over $550 million toward The Campaign for Stony Brook to support students, faculty and research; read their stories here. What area interests you? Support your passion and make your contribution today.