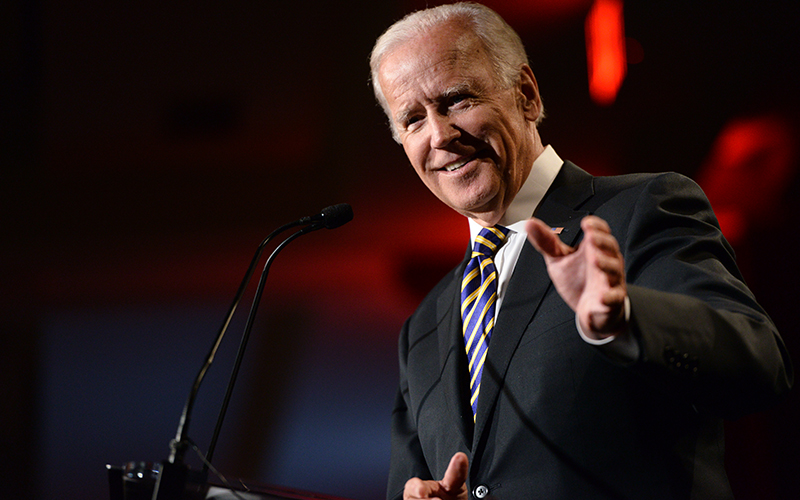 In recognition of his dedication to the fight against cancer, Joseph R. Biden Jr., 47th Vice President of the United States of America, was honored at the Stars of Stony Brook, Stony Brook University’s annual fundraising gala at Chelsea Piers in Manhattan on Wednesday, April 19.

Hosted by the Stony Brook Foundation, the Gala generates funds for student financial aid and a select academic area of excellence. This year, the University raised $6,946,000 in gifts and pledges including $2,051,000 for scholarships and $4,895,000 to support the Stony Brook University Cancer Center. Since 2000, the event has raised more than $50 million.

As Vice President, Joe Biden led the White House “Cancer Moonshot” with the mission to double the rate of progress in preventing the disease that leads to more than 8 million deaths worldwide every year. The intention, said Biden in his remarks, was to infuse the cancer research culture with “the urgency of now.” 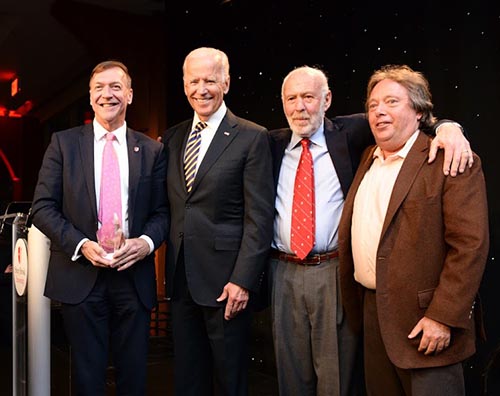 “The Moonshot is a program,” said Biden that “has become a movement, giving cancer patients and the people impacted by their illness new hope. And what cancer patients want more than ever is hope. But we can only hope to make sustainable progress if we’re preparing the next generation of cancer scientists and doctors.”

“At Stony Brook, we share Joe Biden’s determination, sense of urgency and his fundamental confidence in our ability to make a difference in the fight against cancer,” Stony Brook President Samuel L. Stanley Jr. said to the record-breaking 870 guests in attendance. “The Stony Brook Cancer Center brings together the brightest minds, enhancing purposeful collaboration and creating strategic partnerships to share information and accelerate research. Our researchers are receiving worldwide attention for a pioneering study of the genesis and behavior of cancer cells at the molecular level, with the goal of one day helping to detect, treat and eventually eliminate the disease for good.”

Proceeds from the Stars of Stony Brook Gala also generate financial assistance for many of Stony Brook’s most talented students. In his remarks, Foundation Chair and IMAX President Richard Gelfond ‘76 said Stony Brook offers talented, deserving students a pathway to a world they might never have been part of. In fact, just this year a study led by the Stanford Institute for Economic Policy Research ranked Stony Brook among the top 10 public and private institutions in the US as an engine of income mobility. 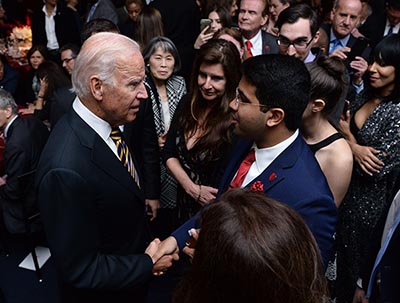 Surrounded by SBU students and other community members, Biden chats with Naveen Mallangada ’17.

“Other universities may make similar claims about social mobility,” said Foundation Chair and IMAX President Richard Gelfond ’76, “but few if any are among the most select institutions with an incredibly diverse student body with a focus on STEM, and can do so while managing a national energy laboratory and delivering excellent healthcare at the only tertiary care facility in the county. That’s a rare combination in American higher education.”

Through continual research and discovery, Stony Brook University Cancer Center is on the forefront of cancer care. In the new Kavita and Lalit Bahl Center for Metabolomics and Imaging, for instance, Dr. Yusuf Hannun and Dr. Lina Obeid are receiving international recognition for their pioneering studies in lipid metabolism and cancer. Their work is changing what is known about the role lipid metabolism plays in cancer and brings us closer than ever before to understanding how to prevent and treat it.

The Stony Brook Cancer Center will relocate next year to the new 254,000 square-foot Medical and Research Translation facility (MART), designed to enable scientists and physicians to work side by side to advance cancer research and imaging diagnostics. 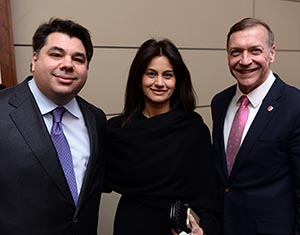 Mr. Biden joins a distinguished roster of scholars, politicians, celebrities and luminaries who have been honored by the Gala for their outstanding and relentless commitment to society, such as Nobel laureate C.N. Yang; IMAX CEO Richard Gelfond; actors Ed Harris, Jane Fonda, Julie Andrews and Alan Alda, Jim Simons and Marilyn Simons (‘74, ‘84);and world-renowned conservationists Patricia Wright and Richard Leakey.

Dollars raised at the Gala count toward the $600 million Campaign for Stony Brook.

Video screened at 2017 Stars of Stony Brook Gala: The Future is Now