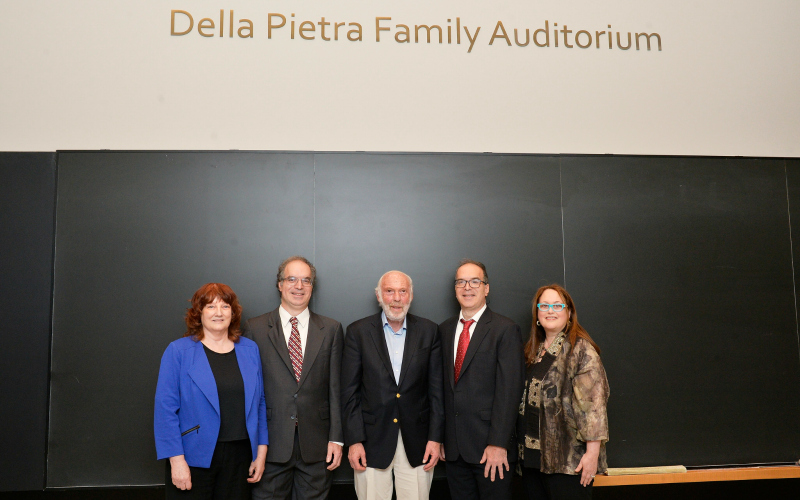 For years, the Della Pietra family has recognized Stony Brook University’s local and global impact by making investments in its most innovative research and academic programs.

On November 17, 2016, the University returned the favor by recognizing the family’s steadfast support for the Simons Center for Geometry and Physics by naming its auditorium the “Della Pietra Family Auditorium.”

“How lucky we are that our good friends Pamela Hurst-Della Pietra and Stephen Della Pietra and Barbara Amonson and Vincent Della Pietra have chosen to believe in and invest in our shared vision for Stony Brook University,” said President Samuel L. Stanley, Jr. “The philanthropy and service of this generous family has literally reached every corner of the University.”

Stony Brook University Provost Michael Bernstein noted that in “an era of reduced public funding for higher education, philanthropy enables Stony Brook to maintain the highest levels of excellence to enhance the student experience and facilitate student and faculty success.”

Most recently, the Della Pietras donated $7 million to two of the University’s unique, high-impact programs; $5 million to The Simons Center for Geometry and Physics and $2 million to the new Global Health Institute, established in 2013 by philanthropists and long-time friends of Stony Brook Jim and Robin Herrnstein.

“The Center brings together researchers whose interest overlap so they can compare notes, learn from each other and even join forces, creating a vibrant atmosphere that draws everyone into a very positive attitude toward research,” said John Morgan, Simons Center former director, and faculty member.

By investing in STEM education at Stony Brook, the Della Pietra’s entrust the next generation of great minds — the up and coming students who aspire to be scientists, engineers, mathematicians, doctors and more — with breakthroughs sure to impact countless lives on a daily basis.

“We are at the vanguard of new thinking in relation to the nature of the universe, resulting from the collaboration and collisions of ideas between some of the world’s top researchers,” said the Simons Center’s Director Luis Alvarez-Gaumé. “The Della Pietra family gift is a gratifying validation of our work and we intend to continue generating a significant return on their investment in our mission.”

Global Health Institute (GHI) Founding Director Peter M. Small, MD, formerly the director of the Global Tuberculosis Delivery Program at the Bill and Melinda Gates Foundation, is equally excited by the Della Pietra family’s support for GHI’s mission as it explores the connections and solutions to Madagascar’s ecological devastation, poverty and disease.

“What we learn in Madagascar will doubtlessly improve the lives of the Malagasy people and the future of the country,” said Dr. Small. “But also the world’s understanding of disease and delivery of health care in other developing countries.”

In 2012, the Della Pietra family also created an endowed chair in bioimaging, now invested in Dr. Ramin Parsey, a renowned research psychiatrist. Bioimaging enables scientists to one day determine how autism affects the brain, how to diagnose heart disease earlier and why some cancer patients respond to therapies while others don’t.

The family also underwrites a Saturday morning program for high school math enthusiasts on theoretical and applied math taught by Stony Brook professors, as well as the Della Pietra Lecture Series at the Simons Center — some geared for the public, some for faculty and postgraduates — covering relevant topics such as how bacteria talk to one another, how sound is produced and perceived, and evidence refuting Newton’s Third Law (every action has an opposite and equal reaction).

“We are humbled by the Della Pietra family’s confidence in Stony Brook. Their philanthropy is invigorating,” said Senior Vice President of University Advancement Dexter A. Bailey, Jr. “The Della Pietra Family Auditorium in the Simons Center is a permanent reminder of our gratitude and the impact the family has had on our campus community.”