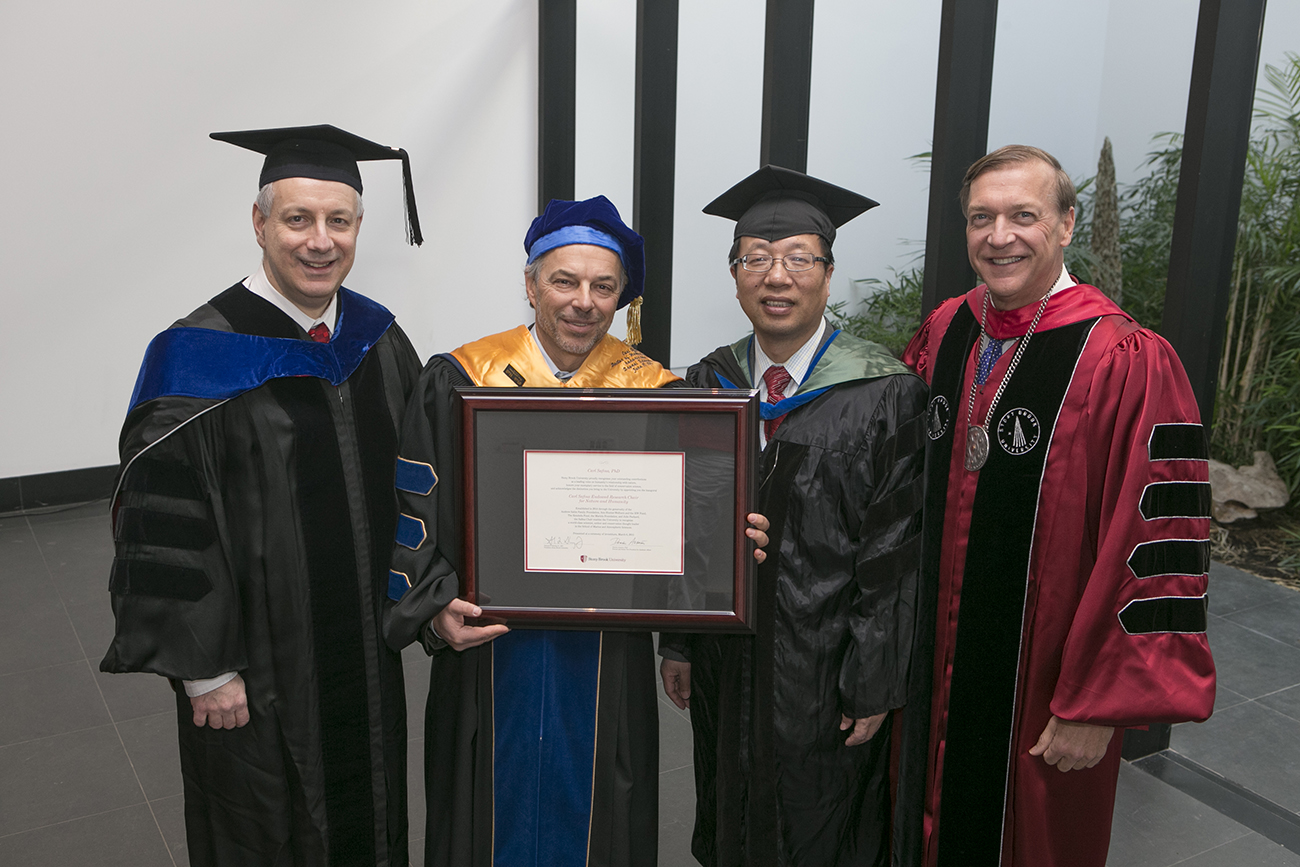 Stony Brook University Professor Carl Safina, PhD, one of the nation’s most respected environmental writers, was formally installed as the inaugural holder of the Carl Safina Endowed Research Chair for Nature and Humanity at the School of Marine and Atmospheric Sciences (SoMAS) during a Stony Brook Investiture Ceremony on March 6, 2015.

The Safina Chair will be dedicated to exploring humanity’s relationship with nature and how nature affects the condition of human dignity. Building on the SoMAS faculty’s expertise in atmospheric sciences and oceanography, the Safina Chair will work to show that scientific information is crucial to ethical decision making.

The Safina Endowed Research Chair was established in 2014 through the generosity of Ann Hunter-Welborn and the HW Fund, The Kendeda Fund, Julie Packard, the Andrew Sabin Family Foundation and an anonymous donor.

Dr. Safina’s writing has indeed shown how humanity is changing the natural world and what those changes mean for wildlife and people. His seven books, including the upcoming Beyond Words: How Animals Think and Feel, have made him a leading voice for conservation.

“Becoming an endowed research professor is an astonishing full-circle turn for a career that long ago left academia for service in the not-for-profit world. It feels like a great homecoming,” said Dr. Safina.

“Much more, it feels like a renewed way to be of service and to focus some of my energies directly on the next generation, as I’ve long wished to do,” added Dr. Safina, one ofAudubon Magazine’s “100 Notable Conservationists of the 20th Century.”

“The center is inspiring people to make better choices by translating scientific information into language people can understand,” he said. “The Safina Endowed Research Chair will continue this tradition.”

Donor Ann Hunter-Wellborn quickly became a fan of Dr. Safina once she read his books.

“I read Carl’s first three books back to back, and then when The View from Lazy Point came out, I was so moved,” she said. “After meeting and speaking with him … there was no way I could resist endowing this chair.”

Another donor, Julie Packard, added, “I have had the opportunity to work with Dr. Carl Safina over many years. I can say without hesitation that few people have done more to influence thinking and provide leadership in the realm of ocean conservation.”

Andrew E. Sabin of the Andrew Sabin Family Foundation said he supports Dr. Safina’s work because “he makes a difference in how people see and understand our relationship with the natural world.” Sabin added, “He’s a true inspiration to many.”

Private philanthropy has helped Stony Brook more than quadruple its number of endowed professorships and chairs – from eight to 41 – over the last three years.

“Endowed faculty are an investment in the continued success of the outstanding scholarship and teaching of individual professors and in the students whose lives are touched by these invaluable professors,” Dr. Stanley said.

About Carl Safina
“The voice of ocean conservation,” Safina has long sounded the alarm for preserving marine animals and Earth’s life-supporting oceans. Dr. Safina is a research professor in the School of Marine and Atmospheric Sciences and steering committee co-chair of the Alan Alda Center for Communicating Science at the Stony Brook University’s School of Journalism. His Safina Center blends science, art and literature to inspire a closer bond with nature, particularly the sea.

In 2012, 10 episodes of “Saving the Ocean with Carl Safina” aired nationally on PBS. In 2013, Safina traveled 450 nautical miles in remote and beautiful southwest Alaska as lead scientist on the Gyre Expedition with a team of scientists, artists and educators to respond to the global marine debris crisis. Afterwards a Gyre art and science exhibition premiered at the Anchorage Museum, followed by a national tour sponsored by the Smithsonian and a National Geographic Gyre Expedition Documentary.

Safina’s books include Song for the Blue Ocean; The View from Lazy Point, which explores the relationship between nature and human dignity; and A Sea in Flames, covering the events and anguish of the 2010 Deepwater Horizon oil blowout.

Carl Safina’s work has been recognized with a MacArthur Prize and Pew and Guggenheim Fellowships. His writing has won Orion, Lannan, and National Academies literary awards and the John Burroughs, James Beard, and George Raab medals. His work appears in The New York Times, National Geographic, Audubon, Orion and other periodicals, and on the Web at National Geographic News and Views, Huffington Post, and CNN.com. Safina was a finalist for the Indianapolis Prize for Wildlife Conservation in 2014, and has been nominated again in 2015.