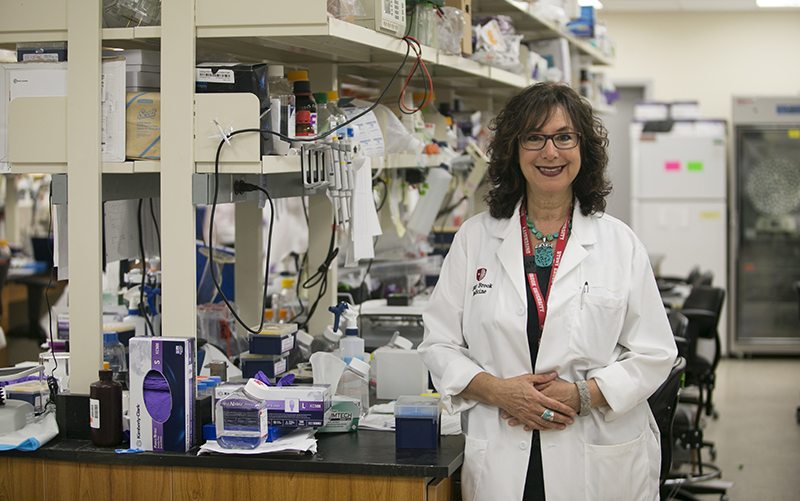 Researchers Discover Metabolic Pathway of a Known Lipid has Implications in Cancer, Obesity

Less than four months since the opening of the Kavita and Lalit Bahl Center for Metabolomics and Imaging, researchers at The Stony Brook Cancer Center are making headway in the intervention and prevention of cancer, a disease that leads to more than eight million deaths worldwide every year.

Now — led by Lina M. Obeid, MD, Dean of Research at Stony Brook University School of Medicine — a team of researchers have discovered a novel metabolic pathway of the lipid ceramide, which is involved in cell death. Specifically, they found out ceramide is metabolized by the addition of a fatty acid to make a new lipid called acylceramide.

The finding illustrates that ceramide is stored in lipid droplets, a step that may help to uncover processes necessary for cell death and lipid metabolism, and therefore has implications in the development of cancer or obesity. The paper, titled “Ceramide is Metabolized to Acylceramide and Stored in Lipid Droplets” has been published in Cell Metabolism.

“The storage of acylceramide in the lipid droplet appears to sequester it away from its ability to be biologically active, thus making cells somewhat resistant to chemotherapy ceramide-induced cell death pathways,” Dr. Obeid explained. “We also discovered that this metabolic pathway occurs by a newly described interaction between three proteins, the ceramide-synthesizing protein called CerS, the fatty-acyl-CoA Synthase protein called ACSL, and the enzyme that adds them together named DGAT2, also utilized in fatty triglyceride synthesis.”

The three proteins appear to form a complex that uses the lipid ceramide and the fatty acid to form the acylceramide in the lipid droplet in cells. The research team also showed that a high fat diet can cause this complex of proteins to form in the liver, which has added implications to cell death resistance and therefore the development of cancer.

This discovery is just the beginning of many potential breakthroughs, including the discovery of diagnostic cancer biomarkers and the ability to monitor them during treatment; the identification of new cellular targets for cancer treatments; the ability to individualize treatment by giving clinicians the tools to track patient response to various therapies; and the development of preventative techniques by determining how lifestyle factors such as obesity, tobacco and alcohol use, and diabetes are linked to susceptibility to cancer.

As these research breakthroughs continue to be realized, public health policies can be shaped to better facilitate cancer prevention practices. For more about the Bahl Center for Metabolomics and Imaging, click here.