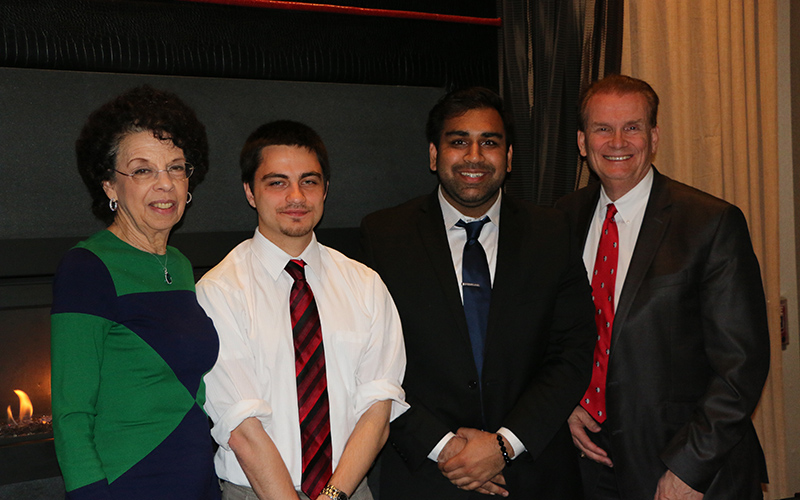 In a perfect example of the past investing in the future, three current Stony Brook University students have been named the first recipients of the SBU Alumni Association Past Presidents Scholarship.

The 19 members of the Past President Council came together on April 5 during a dinner reception to meet their three honored guests: Ravi Patel ’16 earning a BE in Biomedical Engineering; Gregory Poterewicz ’16 earning a BS in Biology; and Robert Maloney ’16 earning simultaneous MA in Teaching and BS in Mathematics degrees.

The President’s Council aspired to fulfill a $100,000 group contribution to The Campaign for Stony Brook during an annual dinner meeting in late 2014, where each member of the Council pledged to make a personal contribution to the endowment. To date, $85,000 has been raised in support of the scholarship endowment, which will count toward the Campaign for Stony Brook’s $75 million scholarship goal.

Snyder explained she and the Council understand how the financial burden of tuition can affect a student’s academic focus, something Dexter A. Bailey Jr., senior vice president for Advancement, elaborated on. “Though the 18 percent we receive from New York State for our operating budget is generous compared to other states, providing high quality, low cost education is an expensive endeavor in today’s economic climate. Which is why philanthropy is more important than ever,” Bailey said. “Today’s success is built upon those who have come before.”

“I am beyond grateful for the opportunities that have been presented to me in my life,” Patel said at the dinner. “Discussing my future endeavors with such distinguished individuals allowed me to look at my future plan, as a whole. I always knew I wanted to make a difference in the field of biomedical engineering. After hearing all that is being done at Stony Brook University, I want to make an ever bigger difference.”

Bob Stafford ’72, ’82, president of the University’s Alumni Association, believes the scholarship illustrates a continued leadership by the Past President’s Council in support of the University’s undergraduate students. “They have set a positive example for not only our own alumni, but also for other university alumni groups who want to emulate what they have done,” he said.

Though the Association has made previous donations to The Campaign for Stony Brook, Matthew Colson, executive director of Alumni Relations, explained the Association’s Board of Directors pledged 100 percent participation for the public launch, as well as an additional $100,000 pledge to scholarships in their effort to show support and positively impact the University. “Stony Brook offers an exceptional education at an incredible value, but many students can’t afford even in-state tuition. Scholarships enable the University to recruit and retain talented students across the socioeconomic spectrum,” Colson said.

The Stony Brook Alumni Association celebrated its 50th Anniversary in August 2015. For half a century, the Association has worked to connect and support an extensive network of more than 160,000 Stony Brook University alumni. In addition to hosting reunions and networking events, the Association provides access to lectures, career services and continuing education. Alumni also get involved as student mentors, admissions volunteers, and chapter or club leaders.

Colson said there are many ways for alumni to participate in The Campaign for Stony Brook. You can give individually, work together with others from your field or a campus association or take advantage of matching challenges to double your gift.

“The Black and Latino Alumni Network, an affiliate of the Association, recently created a scholarship to afford access to students — and to promote the University’s goal of a diverse student body. This is the first scholarship funded by one of our alumni chapters and we’re absolutely thrilled,” said Colson.