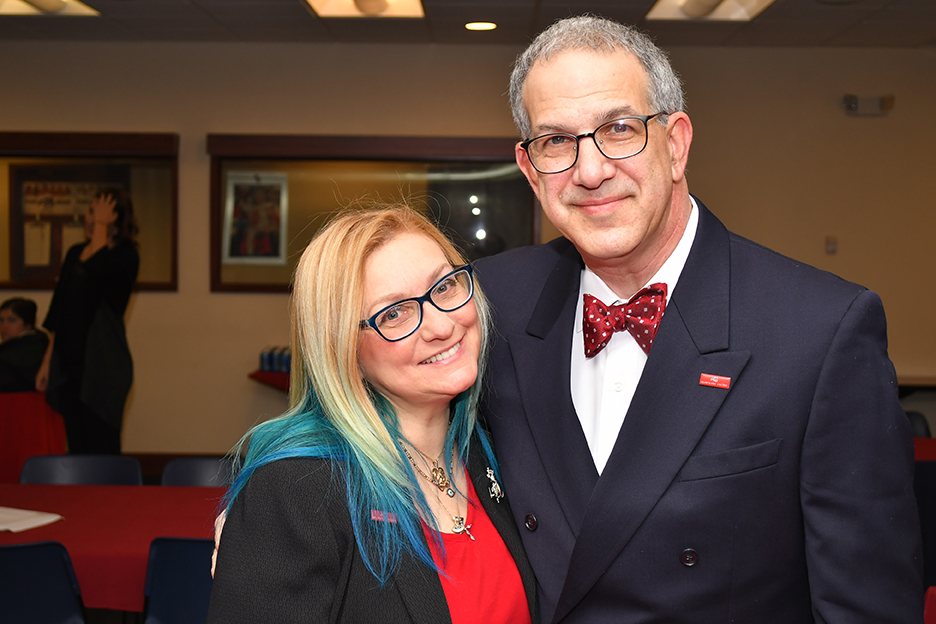 While graduate students at Stony Brook University’s Harriman School – which would eventually grow to become the College of Business – Neil Butterklee ’80 ’82 and Arlene Butterklee ’82 ’84 learned how to be agile, to think on their feet, and react quickly.

Not in class…but in the Fencing Club, which Arlene found hard to avoid thanks to Neil’s ubiquitous flyers.

“They were literally all over campus, on every door, every elevator, every building,” recalled Arlene. “‘Be another Errol Flynn. Join the Fencing Club.’”

Arlene would soon become one of Neil’s first recruits to the newly-formed club, and before long would become more.

“He was telling everyone about the fencing club,” Arlene said of the first meeting, “and introducing us to a coach. What I remember is that my friend Sarah said to me, ‘He likes you,’ and at the time that she’s saying that, he hands me a paper and says, ‘Can you please put your name and phone number here on the roster?’ He handed it to me first, so my name was on the top, so he’d know who I was.”

Of course, fencing at Stony Brook was the start of more than a life together for the Butterklees. For Neil, starting a club from scratch was also a hands-on lesson in management.

“He had to contact the University, get permission to hold the club, and then he had to apply for funding so that we had the money to hire a coach and buy equipment,” Arlene said of Neil. “That was something that was brand new to him that he’d never done before until he decided to form a fencing club. It provided a lot of knowledge to do that as a student.”

It’s the kind of knowledge that the Butterklees are hoping to provide for future generations of Stony Brook students through the Arlene and Neil Butterklee Graduate Assistantship.

“The Butterklees have a long and distinguished history as supporters of the College of Business,” said College of Business Dean Manuel London, “from the guidance and wisdom they offer as members of the Dean’s Advisory Board to the scholarship support they provide. We’re grateful that they’re expanding their support through the Arlene and Neil Butterklee Graduate Assistantship, and excited about the impact this will have not only for our graduate students, but for our faculty and staff as well.”

The assistantship – supported through both an endowment and -current use money – will provide funds for graduate students to assist members of the College of Business faculty and staff with research and grading papers, as both Butterklees did while earning their graduate degrees, in addition to administrative work.

“The work for the department has two benefits,” Neil said. “It aids the professors in the department – it helps them do research, or helps the department function – and for the student, it gives them some experience in both the glamorous and unglamorous parts of real work.”

While both Butterklees changed careers after earning their degrees from the Harriman School – Neil is Associate General Counsel for Con Edison, while Arlene is Senior Radiation Therapist for Northwell Health – the experience they gained as graduate assistants has served them well.

For Arlene, who breeds and shows Chinese Crested dogs in her spare time, being a graduate assistant was a practical lesson in the importance of unglamorous work.

“Nobody sees the behind-the-scenes work of washing the dogs, cleaning the kennels, taking care of them on a day-to-day basis and doing the training,” Arlene said. “The glamour is when you watch TV, at Westminster, the people in their suits and their gowns, walking on the green carpet and showing the dog to perfection. Nobody sees the part that’s underneath. You have to do that.”

By passing that lesson on to graduate students in the College of Business, the Butterklees are providing not just financial support, but valuable preparation for success beyond Stony Brook.

“So many of the most valuable lessons students learn while earning their degrees take place outside the classroom,” said Dexter A. Bailey Jr., senior vice president for University Advancement. “Neil and Arlene Butterklee saw that firsthand at Stony Brook, and we are so glad that they’re making the same kind of lessons possible for future generations of students.”

Image Caption: Arlene Butterklee ’82 ’84 and Neil Butterklee ’80 ’82 are funding a Graduate Assistantship in the College of Business.