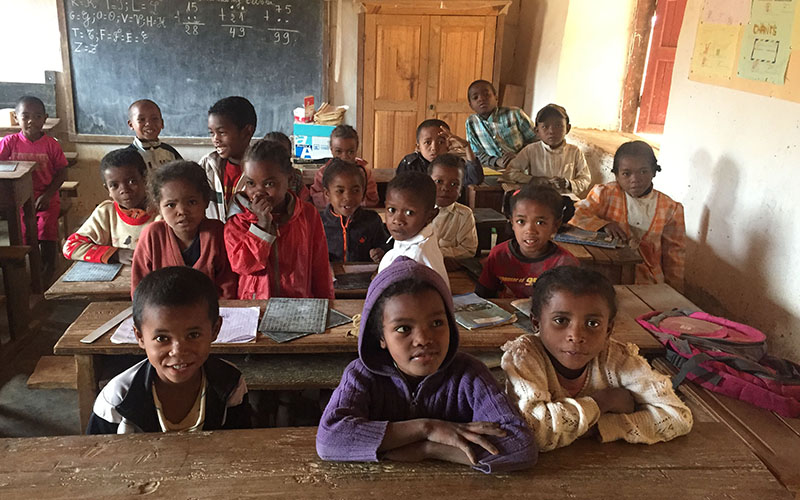 My Rainforest, My World

In the heart of Madagascar’s rainforest — one of the economically poorest regions in the world — 12-year-old Hanta watches the edge of the treeline recede into the distance. Why the forest she calls home is disappearing has always been a mystery to her, until now.

Thanks to the continued generosity of the Three Graces Foundation, Stony Brook University’s Centre ValBio (CVB) has integrated conservation education into the school curriculum of Madagascar’s most remote villages.

Where Hanta and others like her live there is no running water, no electricity, and the houses are made of mud and grass. Even worse, there’s at least a 70 percent chance she and her peers won’t finish grade school, feeding a grinding cycle of poverty in one of the world’s most biodiverse countries.

“Education will help Malagasy children lead healthier lives, who will in turn steward the natural environment as they grow up and become contributing members to a stronger economy,” said Dr. Patricia Wright, distinguished professor at Stony Brook and founder and executive director of Center ValBio who has led research and conservation efforts in Madagascar for 30 years. She was a driving force behind the creation of the region’s Ranomafana National Park and is distinguished for her ongoing work protecting and saving several species of lemur endemic to the area from extinction.

The My Rainforest, My World program brings a participatory science, critical thinking and community participation curriculum to 10 peripheral zone villages and schools, which are a day or more walk from the nearest road. Offered at the moment to 20 fourth graders per village, these 200 students are introduced to desks, textbooks, maps and even school lunch for the first time. 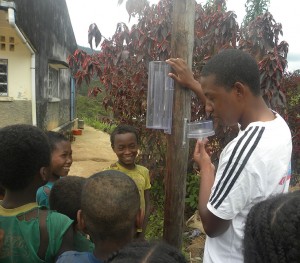 Malagasy children and a student teacher conduct a science project that involves learning about the water cycle, measuring rainfall and the impact of climate change.

Science projects vary and are often based around the community’s needs. Some include proving the existence of germs via the use of donated microscopes; field trips to the forest, a place children don’t often visit; the understanding of basic hygiene and the implementation of waste disposal systems; or building large gardens for the community to tend to, which is also used to supplement a school lunch that parents cook. Most parents will even stay with their children to hear the day’s lesson, effectively teaching two generations at once.

Together, the students and community members will plant trees and measure how fast they grow to gain a sense of time and the dangers of deforestation, they’ll decorate the classroom walls with world and hand-drawn village maps to gain a sense of place and they’ll learn about the water cycle in relation to the drought they’re experiencing and then talk about climate change. And that’s only a small sample.

“You should see these kids’ faces,” Dr. Wright said, “We’re transforming them.” She used Hanta as an example of such progress. “She wanted to see how much wood her parents were burning,” Dr. Wright explained, “She measured each piece of firewood they used and figured how many trees that equaled per month: 12 trees. That’s one family. She was shocked, everyone was. This is about understanding nature and what we’re doing to it. It’s not infinite.”

With continued support, Dr. Wright hopes to expand the program to 20 or more villages in the coming year. “This continued partnership and generous support from Three Graces has changed the lives of so many already. I love working with this foundation. They’re light on their feet and fast acting,” Dr. Wright said. “We’re putting the future of Madagascar into the hands of its youngest generation.”

Dexter A. Bailey Jr., senior vice president of University Advancement at Stony Brook, echoed the sentiment. “Their philanthropy is not only inspiring, it empowers people to gain the knowledge they need to support an ecosystem they want to preserve.”