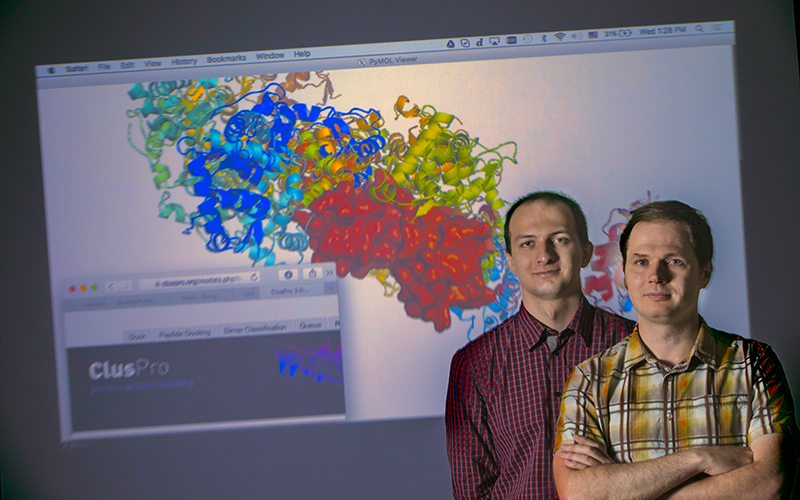 Modeling Protein Interactions: Now So Easy, A High Schooler Can Do It

Aside from water, proteins are the most abundant substance in living cells and their interactions with cellular functions are crucial to healthy life. When they fall short of their intended function or are somehow disrupted, disease can form. Researchers have for years tried to understand the rules by which proteins interact and define 3D atomic structure of protein complexes so they can design new interactions, but it isn’t an average task. On top of the already inherent complexities, proteins also have a size smaller than the wavelength of visible light.

Now, thanks to a team of researchers led by Dima Kozakov and his colleagues out of the Laufer Center for Physical and Quantitative Biology — made possible via a major philanthropic gift in memory of Louis and Beatrice Laufer — what was once reserved for highly trained scientists running sophisticated computational programs can now be completed by a high school student.

It’s called the ClusPro server, a user-friendly automated computer server that calculates complex computations of modeling protein interactions with a handful of clicks from a home computer.

Previously, Kozakov explained that protein complex structures were obtained using expensive and time-consuming experimental techniques such as X-ray crystallography. “While these techniques worked relatively well for finding the structures of individual proteins, the delicate, short-lived protein complexes pose a much more difficult problem,” he said. Kozakov is an assistant professor in the Department of Applied Mathematics and Statistics in the College of Engineering and Applied Sciences, and an affiliate faculty member of the Laufer Center and the Institute for Advanced Computational Science.

To bridge the gap between the number of known individual protein structures and the number of known complexes, Kozakov explained, researchers created special computational algorithms. The idea behind all of these algorithms is to predict the structure of the complex using the structures of individual proteins as inputs. Computer programs calculate billions of possible arrangements of molecules forming the complex and then defines the one that optimizes the interatomic forces. This computational approach became known as protein docking.

For the last decade, Kozakov and his collaborators have developed unique protein docking algorithms, which originally existed only as highly sophisticated computational programs, and only trained scientists and programmers specializing in protein modeling could perform the calculations.

But that day is passed. Approximately 18,000 researchers worldwide have now used ClusPro, which has consistently provided the most accurate results among automated protein docking servers in an international competition called CAPRI. The design of the server is not only for professional scientific use; the simplicity of usage enables high school and college educators and their respective students to use ClusPro.

The resource, available to researchers around the world, is detailed in a paper published in Nature Protocols titled, “The ClusPro web server for protein-protein docking.”

The Laufer Center for Physical and Quantitative Biology was established in 2008 in loving memory of Louis and Beatrice Laufer by their children, Helen Laufer Kaplan and Howard Kaplan, Jeffrey and Barbara Laufer, and Henry and Marsha Laufer.

On May 7, 2012, the Center celebrated the official dedication of its newly remodeled building, close to the Life Sciences Center on the Stony Brook University campus.

The Center’s four core and 12 affiliated faculty include research groups in physics, math, chemistry, computer science, and biology at Stony Brook, as well as Cold Spring Harbor Laboratory. The Center brings physics, math, and computation to bear on solving challenging problems in biology and medicine. Computers are used to discover new medicines and to decipher the human genome. Physics is the basis for powerful technologies and principles for understanding how healthy biological cells work and how diseased cells fail.