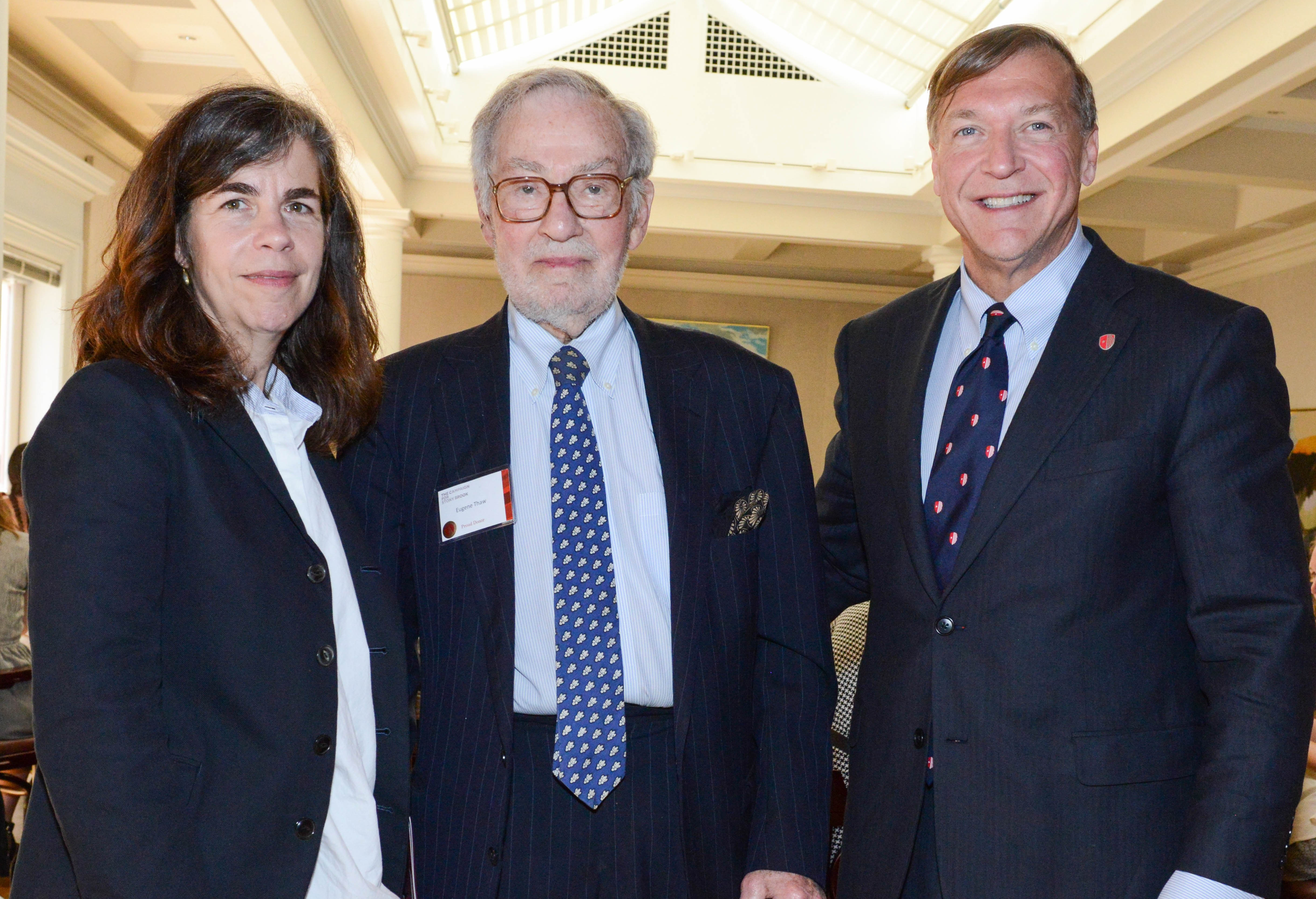 Highlighting Stony Brook University’s commitment to becoming a leader in the study of modern American art, Katy Siegel, PhD, was formally installed as the inaugural holder of the Eugene V. and Clare E. Thaw Endowed Chair in Modern American Art at The Century Association in New York City on May 25, 2016.

“It is an understatement to say that I am delighted that Katy Siegel — internationally distinguished scholar, curator and author, whose exhibitions and publications have both broadened and deepened our understanding of 20th and 21st century modern art — has joined our faculty,” said President Samuel L. Stanley Jr. “Endowed chairs are lasting tributes to the generous donors who establish them, and are a long-standing means of attracting prominent scholars and retaining outstanding faculty.”

Established in 2015 and made possible through the generosity of the Thaw Charitable Trust and a matching contribution from the Simons Foundation, the Thaw Chair and Siegel’s appointment underscores Stony Brook’s fostering of education in modern American art and ties the University closer to the Pollock-Krasner House and Study Center — deeded to the Stony Brook Foundation in 1987 under the guidance of Eugene Thaw, one of the world’s most esteemed and successful private art dealers and trusted friend and adviser to Lee Krasner.

The Pollock-Krasner House could be said to be the epicenter of modern American art and is the site where Pollock and Krasner created their most famous works of art. 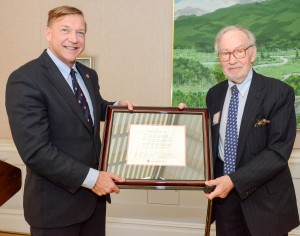 Stony Brook University President Samuel L. Stanley Jr. presents Eugene Thaw with a declaration honoring his generosity and support of the Pollock-Krasner House and Study Center and the establishment of the Eugene V. and Clare E. Thaw Endowed Chair in Modern American Art.

“The Pollock-Krasner House (and Study Center) is now one of the sacred shrines of abstract expressionism,” said Eugene Thaw, who thanked Helen Harrison, director of the House and Study Center, for her careful attention to the Pollock-Krasner vision. “We need our young (students), who eagerly come to us, to have some realization of what has been happening in Eastern Long Island for at least three generations,” he continued. “Pollock’s touch is like handwriting, very personal and easy to identify when you become familiar with his work.”

In addition to the House and studio — visited by more than 8,000 people per year — the study collection contains Krasner’s and Pollock’s books, as well as other artifacts of mid-20th century art, many of which speak to and reference the East End of Long Island.

Harrison complimented Siegel as the recipient of the University’s newest endowed chair for her ability to seamlessly cross between academic and curatorial work.

“Without a faculty member and someone to use this material in their teaching, we weren’t fulfilling our academic mission as a study center,” Harrison said. With Siegel’s guidance and through her expertise and background as an artist and curator, Stony Brook students will take their studies of modern American art into the wider world. “For Stony Brook to be at the forefront of this Pollock-Krasner legacy is very important.” 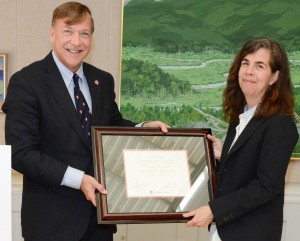 Stony Brook University President Samuel L. Stanley Jr. presents Katy Siegel with a declaration honoring her contributions in teaching, research and service to the field of modern American art during her appointment as the Eugene V. and Clare E. Thaw Endowed Chair in Modern American Art.

One of the primary goals of Stony Brook University’s current $600 million Campaign is to create a total of 100 endowed faculty positions by 2018 to attract more eminent scholars and researchers and retain outstanding faculty across a wide range of disciplines. Over the past six years, the number of endowed chairs and professorships at Stony Brook has increased more than seven-fold, to a total of 42 endowed chairs and professorships.

“The extraordinary endowment gifts of the Pollock-Krasner Foundation and the Thaw Charitable Trust ensured the museum’s operational stability and programmatic future…its collections, and its educational programs,” President Stanley said. “The House and Study Center can truly fulfill its mission: To preserve and interpret the artists’ living and working environment, promote scholarship and encourage creativity.”

“In terms of the deep knowledge and ethics Mr. Thaw has brought to his dealing and collecting,” Siegel said, “His role as a donor, a gift giver and board member…as the inaugural holder of the chair, I hope to reflect those values in my activities at Stony Brook.”