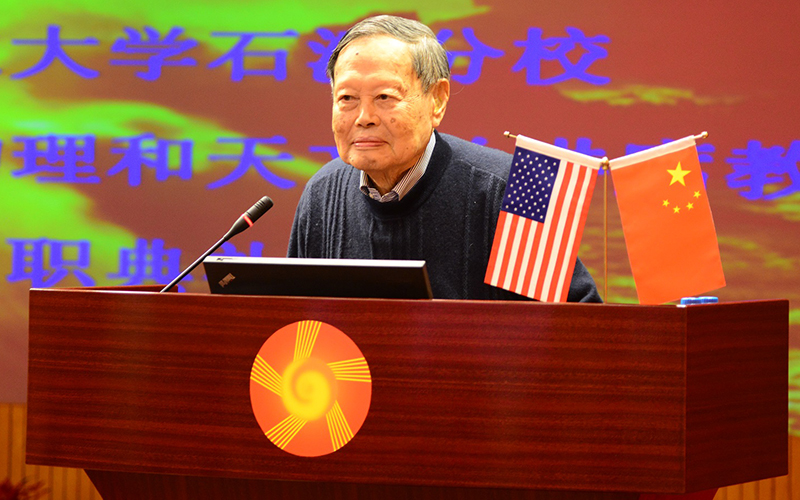 The impact that Professor Alexander Zamolodchikov has had on the field of physics can be measured by a simple metric: 18,000. It’s the number of times his published research has been cited; one of the highest in physics to date.

A pioneer in modern theoretical physics and member of the National Academy of Sciences, Dr. Zamolodchikov is known internationally for his contributions to the study of condensed matter physics, conformal field theory and string theory.

Adding to an extensive list of titles and awards, Dr. Zamolodchikov became the inaugural Chen Ning Yang – Wei Deng Endowed Chair in Physics and Astronomy on January 6 at an investiture ceremony in Beijing, China at Bright Ocean’s headquarters.

“Endowed faculty are critical to top public research universities as a means of attracting and retaining scholars at the forefront of their fields,” said Stony Brook University President Samuel L. Stanley Jr. “Thanks to the vision and generosity of Wei Deng, PhD, Dr. Yang’s decorated past and affiliation with Stony Brook will continue to be a catalyst for new research and innovation and inspire and influence the future of physics.

“For his outstanding contributions to the field of physics and the distinction and honor he brings to Stony Brook, it is my privilege to welcome Dr. Zamolodchikov to the Stony Brook research community.”

The Chair was established through the generosity of Dr. Wei Deng, the founder and chairman of Bright Oceans Corporation, a high-tech industrial group in China. Dr. Wei Deng was inspired to honor Chen Ning Yang’s scientific legacy as one of China’s most venerated scientists, recipient of the 1957 Nobel Prize in Physics and the first director of Stony Brook’s Institute of Theoretical Physics — now the Yang Institute for Theoretical Physics.

“The C.N. Yang – Wei Deng Endowed Chair is expected to help Stony Brook University transform their research achievements into actual benefits,” Wei Deng told the Xinhua Net Press, “Which will better serve people all over the world, including the people in China and America.”

“I take it as an extraordinary honor to accept the position associated with the name of C.N. Yang, whose status in theoretical physics is nothing short of legendary,” Dr. Zamolodchikov said. “Dr. Yang’s groundbreaking ideas constitute the basis of many central developments in contemporary Theoretical Physics, and I am especially proud that my work contributed somewhat to further developments of some of those ideas.”