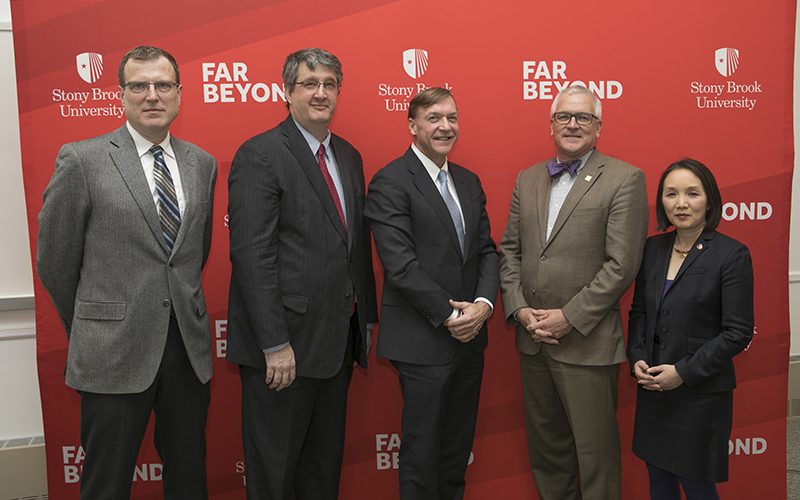 “It’s very important for Stony Brook research to have our infrastructure match our aspirations,” said Robert Harrison, director of the Institute for Advanced Computational Science (IACS). And as one of the nation’s top public research universities, the aspirations are limitless.

The matching infrastructure to support such ambition is now in place.

Operated by IACS — originally established by a $10 million anonymous donation plus matching funds from the Simons Foundation — Stony Brook became the first higher education institution in New York State to offer a 100 gigabit-per-second (Gbps) connection to the Internet2 Research Network on March 10, 2017. Such speed will revolutionize the quality, quantity and speed of digital research at Stony Brook.

“This connection supports Stony Brook’s regional leadership position in high-performance computing, while advancing our goal as a top public research university to educate and train future generations of scientists,” said President Samuel L. Stanley, Jr. “I’m looking forward to the many new possibilities this connection will offer for interdisciplinary collaboration, an essential element behind the expansion of our expertise and our success in science, technology, engineering and mathematics as well as in the social sciences and humanities.”

The new high-speed connection is currently accessible to students, faculty and staff who conduct research using either the SeaWulf or LI-red high-performance computational clusters. The connection also builds the necessary foundation to link additional research locations on campus at high speed in the future, including the Research & Development Park.

“Data’s big and messy, and if you’re going to share it or use it, you have to be able to move it — that’s why this connection is essential for us to continue to play our lead role,” Dr. Harrison noted.

The 100 Gbps connection is so fast that Stony Brook researchers could transfer a complete copy of a human genome file to a lab for testing in just 90 seconds, send 300,000 X-ray images in one minute, or download one e-book for every Stony Brook student (roughly 26,000) in only four seconds.

The connection speed will effectively supercharge Stony Brook research currently funded by philanthropy, including work completed at the Laufer Center for Physical and Quantitative Biology, where researchers have recently created a user-friendly computer server that calculates complex computations of modeling protein interactions to gain important insight into many diseases. The connection can also aid researchers in the Kavita and Lalit Bahl Center for Metabolimics and Imaging, where a team of scientists just discovered a new metabolomic pathway that explains how a high fat diet can cause a complex of certain proteins to form in the liver, adding implications to cell death resistance and therefore the development of cancer.

Other areas of research that will benefit from the 100 Gbps connection immediately include computational astrophysics, in which scientists simulate the explosion of stars — producing huge quantities of data; and biomolecular imaging, which uses data-intensive experiments across several areas on campus, including biochemistry, pharmacological science and neurobiology.

While the faster transfer rate helps expedite Stony Brook’s scientific, engineering and medical research efforts, the 100 Gbps connection will also enable research that could not be done without such a high-speed connection.

Virtual pancreatography is one of many ways the Stony Brook Reality Deck — the world’s first immersive gigapixel resolution display — is used, enabling doctors to examine biopsies of the human pancreas in search of potentially malignant growths.

Chair of the Department of Computer Science Arie Kaufman, project director for the Reality Deck, explained that the “leap to 100 Gbps will allow us to conduct some of our experiments in real time, which is critical when deciding whether or not a patient’s biopsy is cancerous while they’re in the operating room,” said Kaufman. “Whether the biopsy is done here at Stony Brook, or anywhere in the country, we need this kind of high speed connectivity to transfer and look at the huge images and amounts of data.”

The new connection will also be a benefit to state and regional industries and the economy through the New York State High Performance Computing Consortium (HPCNY), which includes several other research institutions across the state. By partnering with industries, HPCNY members provide expertise and resources in computational science to expand and accelerate the development of new products.

“We’re excited to provide this new capability to campus research activities,” said Melissa Woo, chief information officer and vice president for information technology. “More possibilities for discovery and invention are now available to Stony Brook through our faster Internet2 connection, made possible by the NYSERNet.”