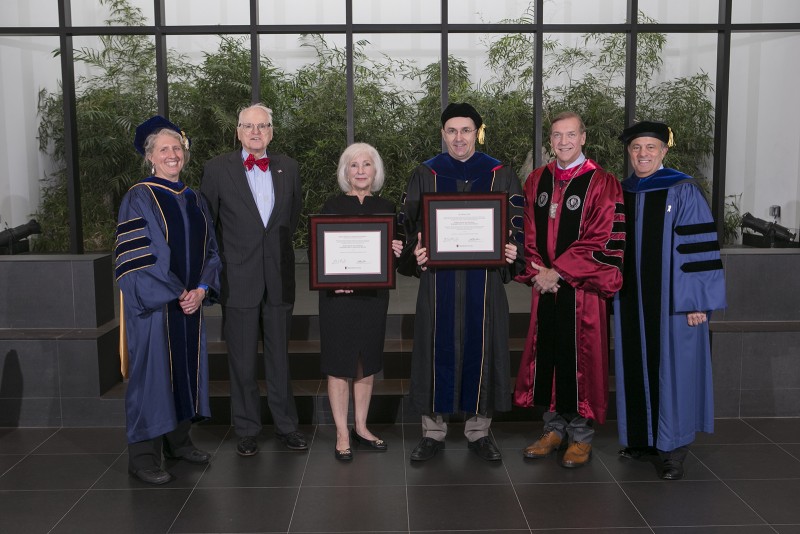 Stony Brook University’s College of Arts and Sciences conferred its first endowed chair in American history on Friday, November 9, as Paul Kelton was officially appointed the inaugural Robert David Lion Gardiner Endowed Chair in American History at a ceremony held in the Charles B. Wang Center.

The Chair, endowed by the Robert David Lion Gardiner Foundation of Hampton Bays, N.Y., enables the University to recognize a world-class educator and scholar, with Kelton, a widely respected scholar in indigenous North American and Colonial history, as the inaugural recipient.

“We value our long-standing partnership with the Gardiner Foundation,” said Stony Brook University President Samuel L. Stanley Jr., addressing representatives from the Foundation in attendance. “Your support of the study of history at Stony Brook University and your foundation’s mission of educating, cultivating and promoting the history of New York help provide context and meaning through which we can process, plan and seek to create our future as individuals, organizations, communities and society.”

Kelton joined the University in 2017 after 16 years at the University of Kansas, where he established a highly regarded indigenous studies program. His scholarly work is widely credited with bringing indigenous history and medical history into dialogue. He is the author of two books,  Epidemics and Enslavement  and Cherokee Medicine, Colonial Germs, both of which examine the biological processes involved in the European takeover of the Americas.

“Why do we do this thing called history?” Kelton asked in his keynote remarks. “We do it to find analogies that we can learn by. What is happening today may be similar to what has happened in the past. History may not repeat itself, but it has often been said that it certainly rhymes. The rhythms of the past can thus point us in the present to make better choices for our future.

“We believe that the study of history enhances empathy. Human experience in the past has been one of struggles and hardships, as well as accomplishments and heroic deeds. This is the humanistic side of history: to see ourselves as part of a larger human story, one that is often painful and regrettable, but one that encourages us to respect human dignity and work for justice in our own world.”

As Kelton continues his study of history, he has found a nurturing environment and generous supporters, and is excited about where his scholarship may lead at Stony Brook.

“I have to say that choosing to come to Stony Brook University is the best career decision I could have made,” Kelton said.

And, while Kelton has already been a welcome addition to the University, his formal investiture marked a key moment for the College of Arts and Sciences.

“This is a particularly meaningful day for our College’s History Department,” said Nicole Sampson, interim dean of the College of Arts and Sciences. “It is our first endowed Chair in History and a new start in a wonderful relationship with a premier Foundation whose mission is to advance New York and Long Island History.”

In his remarks, the Honorable Peter Fox Cohalan — a trustee of the Gardiner Foundation and a retired justice of the Suffolk County Supreme Court — expressed pride in the Foundation’s continued relationship with Stony Brook and the collaboration that brought a scholar of Kelton’s stature to the University.

“Mr. Gardiner wished to increase the knowledge of the culture, the artistic endeavors, and the historical traditions of our societal heritage,” Cohalan said. “It is only fit, natural, and just that the Gardiner Foundation should be working with Stony Brook University, a preeminent school of learning in the State of New York, in this regard.”