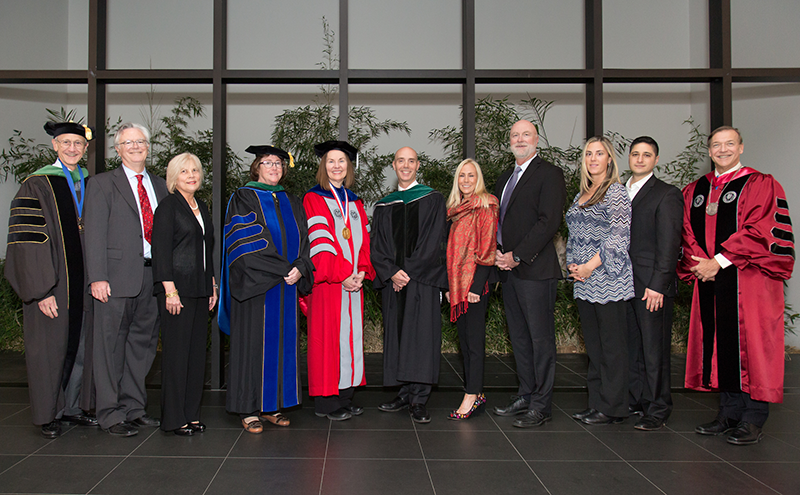 The three new endowed faculty positions were funded by philanthropic gifts from the Knapp family through the Knapp Swezey Foundation, Island Outreach Foundation, and Jane and William Knapp respectively.

“From the start of my tenure at Stony Brook, it has been my goal to create 100 endowed faculty positions across a wide range of disciplines to help the university compete with our aspirational peers for the best and brightest faculty,” said President Samuel L.Stanley Jr. “I am most grateful that through the generosity of the Knapp family and others, we are almost there.”

One of Stony Brook’s best and brightest is William and Jane Knapp Chair in Energy and the Environment Esther Takeuchi, who holds a joint appointment with Brookhaven National Lab and Stony Brook University and owns the most patents (150 to date) of any woman in the U.S.

“When we recruited her, I knew that Esther Takeuchi would be transformational to our aspirations of becoming a national leader in renewable energy and energy storage,” said President Stanley. “In today’s world where sustainability is key, Dr. Takeuchi’s research could not be more important or relevant.”

“Energy storage and the environment are linked,”said Takeuchi. “You can’t have one without the other, and if we’re attuned to both, then we can advance both.”

Takeuchi is currently directing a U.S. Department of Energy $10 million Energy Frontier Research award, leading the research on alternative, environmentally friendly battery systems with powerful energy and lifespan capabilities. Takeuchi is recognized for developing the battery technology that implanted cardiac defibrillators employ today.  During his presidency, former President Obama bestowed her with highest honor possible for technological achievement in the United States – the National Medal of Technology and Innovation.

College of Engineering and Applied Sciences Dean Fotis Sotiropoulos said Takeuchi’s astounding research achievements in energy storage and the environment and her relentless pursuit of excellence are remarkable and inspiring to younger faculty and students.  “I’m beyond proud to have faculty of such caliber and distinction within our College.”

Margaret M. McGovern, BS’78, MD, PhD, the Knapp Chair in Pediatrics, is a professor and physician-in-chief at Stony Brook Children’s Hospital. a board-certified pediatrician and a nationally renowned clinical geneticist. McGovern has a long-standing research interest and is an international authority on the inborn errors of metabolism and Niemann-Pick disease (NPD).

McGovern has been instrumental in the launch of Stony Brook Children’s Hospital, Long Island’s first dedicated pediatric emergency department, a robust pediatric program – 30 specialties with some 200 practicing physicians – and the construction of the new Children’s Hospital building. Dr. McGovern has set a strategic vision and three critical missions for pediatric medicine at Stony Brook – providing expert clinical care to pediatric patients, educating medical students and residents, and providing faculty with an environment that encourages and supports innovative research.

In his introduction of McGovern, School of Medicine Dean Kenneth Kaushansky characterized her as “one of the strongest leaders and a driving force for Stony Brook Medicine’s rising trajectory and momentum in academic medicine.”

“Today marks the beginning of a new tradition for Stony Brook Children’s,” said McGovern. “The first in a line of investitures of committed leaders who will occupy the Knapp Chair in Pediatrics far into the future, who will speak with passion and act with conviction to improve children’s health, and serve as role models for the next generation of pediatricians. What an important tradition the Knapps have started here today – I am honored to be part of it.”

“Chris is new to Stony Brook Children’s Hospital,” said Dean Kaushansky in his introduction of Muratore. “But he is a longstanding national leader in pediatric surgery and education.”

Muratore brings years of training in pediatric surgical research laboratories investigating the fetal treatment of congenital diaphragmatic hernia (CDH). He is a key investigator on the FDA-sponsored investigational device exemption for in utero tracheal occlusion for severe CDH, and he collaborated locally and nationally to advance fetal treatment having served as chair of the fetal diagnosis and treatment committee of the American Pediatric Surgical Association.

In his remarks, Muratore noted that across the country, the “vast majority” of children’s surgical care is being provided in non-children’s hospitals by adult providers. “We need to make children’s health care services and children’s surgical services a national priority,” he said. “A children’s hospital as part of a larger hospital system is the crown jewel in an academic medical center. The Knapp Family and the Knapp Swezey Foundation and all of your collective contributions will no doubt allow Stony Brook Children’s to rise to the occasion and be the stimulus for change.”

For more than 25 years, said Dexter A. Bailey Jr., senior vice president for University Advancement, the Knapp Family’s generosity has impacted areas all across Stony Brook’s campus, including the arts, nursing research, alumni programming  and tick-born disease research, as well as the University’s first endowed chair in pharmacological sciences, among others.

Most significant has been the Knapp’s transformative investments in children’s health, by way of an extraordinary gift in June 2016 to help build a new best-in-class children’s hospital that will transform clinical care, pediatric medical education and research at Stony Brook Children’s Hospital. “The Knapps’ investment in Stony Brook,” said Bailey, “is a reflection of their confidence in the pioneering spirit of the university.”

Addressing the standing-room-only audience, William Knapp revealed his family’s motivation for their philanthropy to Stony Brook. “We have family members who would not be alive today were it not for the world class medical care available at Stony Brook University Hospital. And we give here so the wider community can share the peace of mind that comes with having this tremendous facility here. I do not want to think about what this hospital and university would be like without philanthropic support.”