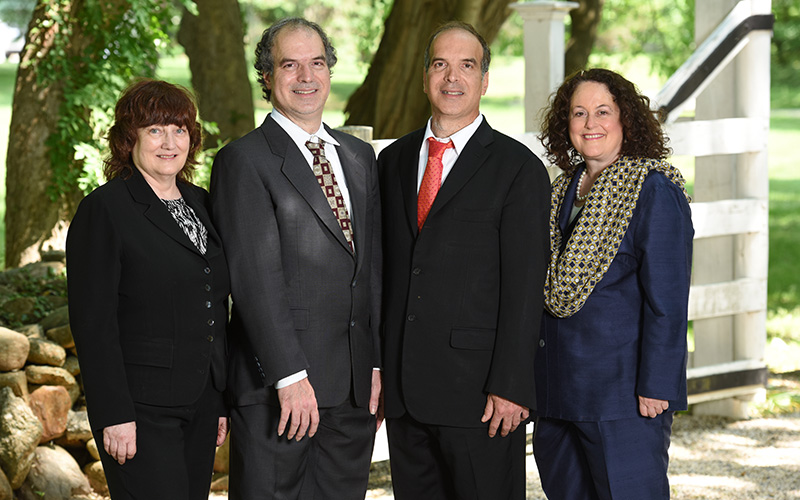 Long–time friends of the University Stephen and Vincent Della Pietra lead research teams at a Long Island hedge fund. Because of their chosen profession, they understand the impact advanced math training can have on one’s career success as well as the nation’s economy and society.

Studies estimate that the U.S. will have more than one million job openings in science, technology, engineering and math (STEM)-related fields by 2018, yet only 16 percent of college graduates will pursue careers in STEM.

These simple statistics, coupled with a longstanding confidence in Stony Brook University, led the Della Pietra brothers and their wives Pamela Hurst-Della Pietra and Barbara Amonson to make a gift of $500,000 to establish the Della Pietra Family Applied Mathematics Program for Gifted High School Students.

“Stony Brook has proven to be the intellectual center of Long Island,” said Stephen Della Pietra. He and his brother attended Columbia University’s celebrated math program while they were in high school. The program made such a difference in their lives that they were inspired to create a similar program at Stony Brook.

“We chose to create the program at Stony Brook because we believe in the power of the public university to reach more students and inspire the next generation of great mathematicians,” Della Pietra added.

Stony Brook University’s math department consistently ranks among the top 25 in the country, and its faculty members win math’s top awards including the Abel Prize (math’s equivalent of the Nobel), the Fields Medal and the Breakthrough Prize.

The program began in Fall 2014 and has attracted more than three dozen of Long Island’s top high school math and science students. During three-hour Saturday classes, Stony Brook faculty and graduate students work with small groups of students, serving up math concepts covering game theory, linear programming, financial and economics mathematics, relativity and other topics to challenge the gifted young women and men. In addition to tackling individual and group projects, students participate in math circles where they explore rigorous mathematics through games, puzzles, and competitions.

Della Pietra Program participants, evenly attended by young women and men, say they applied to the program for a variety of reasons: some wanted a sneak peek at college level concepts or wanted to more fully explore the concepts they learned in school. Most expressed a desire to learn more about how math influences the world around us all.

For Yujin Kim, a senior at the Stony Brook School, calculus was the hook. “I really enjoyed calculus in school and wanted to do more with it—so I looked for something I could do on the weekends,” she said. Kim participated in the Della Pietra program in spring 2015.

“I had a chance to take what I learned in school and make the connection to how math can be applied in different fields, no matter what you pursue,” Kim explained.

Excited by her newfound interest in applied mathematics, Kim decided to enter the Siemens Competition in Math, Science & Technology, the nation’s premiere science research competition for high school students. On October 16, Kim found out she was a national semifinalist—one of 460-plus chosen from 2,250 applicants competing as individuals or members of a team.

Caroline Chen, another of the Della Pietra program participants, applauded the program, saying it is “more than what I’ll learn in school. Even the AP physics test is not this advanced.” Chen attends the highly competitive Jericho High School and said her skills and interest in math outpaced the offerings at her school.

Program director David Kahn, an assistant professor in Stony Brook’s Center for Science and Mathematics Education, said the professors in the program seem to be enjoying themselves as much as the students. “These are some of the brightest young people they’ve worked with. Though the Della Pietra program presents only the fundamentals of advanced applications, it provides students and faculty members with an opportunity to grow and learn and advance STEM knowledge for all of our benefit.”

The Della Pietra Family also sponsors a lecture series on geometry and physics at the Simons Center and support a visiting professor in the Music Department. They have endowed a chair in biomedical imaging at Stony Brook Medicine and provide financial aid for Stony Brook’s best and brightest students.

“Philanthropy from friends like the Della Pietras helps create that margin of excellence so critical to the future of a top public research university like Stony Brook.” said Senior Vice President of Advancement Dexter Bailey Jr. “Through the years, they have had a significant impact on the lives of both students and faculty.”