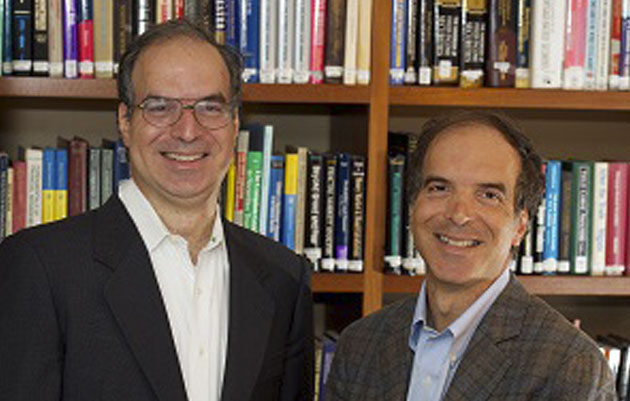 As high school students, brothers Stephen and Vincent Della Pietra participated in a science honors program at Columbia University. The innovative science and technology they learned about opened their eyes to a world of possibilities and has been a major influence throughout their lives, the brothers say.

They both went on to earn undergraduate degrees in physics from Princeton and doctorates in physics from Harvard. After conducting postdoctoral research at the Institute for Advanced Study, Stephen and Vincent forged rewarding careers at IBM, where they worked on statistical pattern recognition, and at Renaissance Technologies, the hedge fund where they both manage research groups.

Now Stephen and Vincent, along with their wives, Pamela Hurst-Della Pietra and Barbara Amonson, have channeled their professional success and lifelong love of science into a leadership gift that will create the Della Pietra Chair of Biomedical Imaging at Stony Brook. Their $1.5 million gift, with a matching gift from the Simons Foundation, will have a total impact of $3 million. The University plans to recruit a nationally renowned researcher to fill the new position later this year.

“Imaging is a fascinating opportunity to apply math in ways that can actually help people. It’s a very interesting application of the type of math I’ve been doing practically all my life,” said Stephen Della Pietra, PhD, who now manages a research group at the hedge fund Renaissance Technologies. “We wanted to do something that would be locally important and make a big difference.”

“Biomedical imaging is set to evolve quickly in the future,” said Vincent Della Pietra, PhD, who also manages a research group at Renaissance Technologies. “Computing power is becoming much better, algorithms are improving and hardware construction is becoming more efficient, so now is a great time to support the field.”

The Della Pietra Chair of Biomedical Imaging will play a crucial role in the medical school’s strategic plan, which focuses on cardiovascular, neuroscience and cancer research, says Ken Kaushansky, MD, Dean of the School of Medicine, and Senior Vice President of Health Sciences.

“Imaging is pushing each of these areas forward faster,” said Dean Kaushansky. “At Stony Brook we happen to be very good—and hope to be world-class—in three areas for which imaging is critical, and that’s why it’s vital for us to have people who understand and can advance this imaging technology.”

“The person filling the Della Pietra Chair will be a very timely recruit,” said Stony Brook President Samuel L. Stanley Jr., MD. “I really appreciate the generosity of the Della Pietras in bringing this forward. It’s going to be a transformational thing at Stony Brook.”

For Stephen and Vincent, the gift represents not only their intellectual interests in biomedical imaging, but also an opportunity to improve medical technology in their own backyards and around the globe.

A key part of that goal will be recruiting the right leader to fill the Chair and guide a team of cutting-edge biomedical imaging researchers.

“Imaging informs a multitude of health care decisions,” said Dean Kaushansky. “If we can find both the right people and the right technologies, we should be able to move our understanding of human disease farther.”

Those advances could include understanding how autism affects the brain, the ability to diagnose heart disease earlier, and figuring out why some cancer patients respond to therapies while others don’t.

Harnessing the power of current imaging technologies will be an important part of the Chair’s job, he said. Imaging equipment, such as CT scanners and MRIs, often arrives from the factory with pre-set parameters that are tuned to the average user’s needs. A top-notch researcher, however, knows how to tweak those settings and push the equipment to perform more accurately and with greater precision.

“It’s like taking a stock Chevrolet and asking a really good mechanic to fine-tune it so it runs faster and turns tighter. Having a great imaging scientist allows you to lift up the hood, look underneath and tinker—that is, rewrite programs and modify the way the image data are analyzed,” said Dean Kaushansky. “If we find the right person who understands the software and what it takes to create advanced images, we can get even more information from the state-of-the-art equipment we purchase.”

The right candidate will likely come from a radiology background, he said, but they will also need to understand the world of big data, since modern imaging equipment yields remarkably large data sets.

The researcher recruited for the Chair will not only need to be well-versed in data processing, but also able to speak the language of mathematics and the language of clinical medicine, and collegial, so he or she can work with many specialties and across multiple areas of imaging science, Dean Kaushansky added.

“Medicine has become a team sport,” he said. “The days of one man or woman working in a lab and making a ‘Eureka!’ discovery are pretty much behind us. Medicine now is so complex, it really takes a team.”

The Chair will be responsible for creating a collaborative environment within the School of Medicine and across many disciplines at Stony Brook, from computer science and applied mathematics to psychology and biology, President Stanley emphasized.

“We’re looking for someone who can help other people do their science better,” he said. “A smart, accomplished Chair will be able to fill that role.”

For example, behavioral scientists at Stony Brook have been using functional magnetic resonance imaging, or fMRI, to study cognitive motor processes, emotions and personality. Dean Kaushansky is hopeful that the new Chair in Biomedical Imaging will work with scientists like these to advance fMRI technology and expand Stony Brook’s imaging capabilities.

That possibility is especially interesting to Pamela Hurst-Della Pietra, D.O., whose background is in children’s health. She recently launched a foundation studying the impacts of digital media on children and adolescents.

“Functional MRI technology is becoming more important in helping us understand, for example, the relationship between media multitasking and its effect on executive function, attention and memory, or the effects of violent video games on children’s brains,” Pamela said. “It’s an extra tool in the toolbox, and I’m excited to support that.”

A portion of the Della Pietra family’s generous gift will also go toward establishing a program for gifted high school students — one similar in spirit to the science honors program that inspired Stephen and Vincent years ago.

“That experience was great. We met students there that we continued to encounter many times in many different settings throughout our careers,” said Stephen.

“I think education is really the most important thing the country should be focusing on,” said Vincent. “It’s critical to support education at the gifted level because these students are going to be our next leaders in science and technology.”