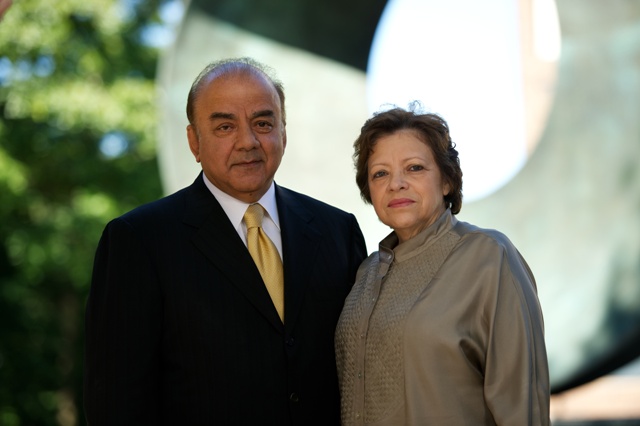 Stony Brook University is the recipient of the largest gift ever made to a U.S. public university for India Studies. A donation of $1.25 million from Dr. Nirmal K. Mattoo, a leading nephrologist and Chairman of Stony Brook’s Center for India Studies Executive Committee, together with a $1.25 million permanent endowment from members of the Indian American community, is raising the profile of the Center for India Studies in the College of Arts and Sciences to become one of the most pre-eminent resource centers in the nation for the study of Indian culture and civilization. Coupled with matching funds of $2.5 million from the Simons Foundation Challenge Grant, the gift has a total impact of $5 million.

Dr. Mattoo’s gift will be used to establish the Nirmal and Augustina Mattoo Chair in Classical Indic Humanities. The Chair will encompass a broad range of areas, including art, esthetics,  ethics, linguistics, literature, literary theory, philosophy, religion, spirituality, psychology, sociopolitical theory, and allied disciplines, to which India has made seminal and influential contributions. In recognition of Dr. Mattoo’s leadership role in developing India Studies at Stony Brook, the Center for India Studies will be renamed the Bishembarnath Mattoo and Sheela Mattoo Center for India Studies, in memory of his parents.

“These generous gifts from Dr. Mattoo and the Indian American community are building a solid foundation for growth of India Studies at Stony Brook,” said Stony Brook University President Samuel L. Stanley Jr., MD. “They will help Stony Brook attract outstanding scholars and talented students who recognize the significant role that India has played from ancient times in developing knowledge systems in a wide range of disciplines and its contemporary role as a major player in an increasingly interdependent global economy and world.”

“Through the generous contributions of Dr. Mattoo and other donors, The Center for India Studies will continue to be a treasury of human achievement—the intellectual heritage and history of a whole subcontinent—at Stony Brook University,” said Dennis N. Assanis, Provost and Senior Vice President for Academic Affairs at Stony Brook University. “SBU’s Center for India Studies has been featured in international news reports and mainstream media outlets, and has also been a primary resource for television documentaries. I am immensely proud of the Center, and given its wonderful record of accomplishments, its strategic vision, and the incredible community support it has garnered, I am confident that the Center will flourish and become increasingly recognized as a cultural center of excellence in India Studies, both nationally and internationally.”

Dr. Nancy Squires, Dean of the College of Arts and Sciences at Stony Brook University, expressed gratitude to all who have supported the Center over the years, and especially to Dr. Mattoo.

“This gift empowers the Bishembarnath Mattoo and Sheela Mattoo Center for India Studies to move into a new era of recognition and of service to the University, our students, and to the Indian community,” said Squires.

The India Studies program started on Stony Brook University campus in 1995 with just two courses taught by Professors S.N. Sridhar and Kamal K. Sridhar. With support from the Indian community and the backing of then President Dr. Shirley Strum Kenny, the Center for India Studies was founded in the College of Arts and Sciences in 1997. Its mission is to promote a better appreciation of Indian thought, culture, civilization, and contemporary issues by developing expertise and resources for studying India for the benefit of the University and the community.  Members of the Center’s Executive Committee, led in the first years by Dr. Azad Anand and for over a decade by Dr. Mattoo, have worked tirelessly to raise funds for the Center’s programs through annual benefit dinners, sponsorships in thematic journals, donations to endowments, and benefit concerts at Carnegie Hall by the Indian classical maestro, Ustad Amjad Ali Khan, also organized by Dr. Mattoo.

“This creative funding model has served us well. It laid the foundation to build on,” says Dr. Mattoo. “However, to ensure the Center’s functions in perpetuity, and take it to a higher level, we launched an ambitious campaign for a fully endowed Center. The strategic vision and energetic advocacy of many brilliant and dedicated leaders, including, especially, Mr. Rakesh Kaul, Mr. Sreedhar Menon, and Dr. Latha Chandran, Mr. Prem Chandran, Drs. Buddhadev and Dolly Manvar, Ms. Tina Mattoo, Mr. Sudesh Mukhi, Dr. Sudha Mukhi, Dr. N.S. Ramamurthy, and Prof. Kamal Sridhar, to name only a few, and the personal generosity of many donors has helped us meet our goal in record time. The catalyst was the magnificent challenge grant from the Simons Foundation, which matched our fundraising dollar for dollar. We are grateful to Jim and Marilyn Simons and to the visionary leadership of President Samuel Stanley and his academic team.”

“The Center is the perfect example of a successful partnership between a public university and the Indian American community,” said Dr. Mattoo. “Looking ahead, the endowment comprising these gifts will put the Center on a solid financial footing and enable us to continue to offer our rich programs in perpetuity.  The study of India, one of the great classical civilizations of the world, is a wonderful complement to one’s education and is a positive influence on the world. And we are delighted to dedicate this endowment as the Indian American community’s birthday gift to India on the occasion of her 66th Independence Day, August 15.”

Each year, India Studies faculty teach some 30 courses to more than 1,500 students, write and edit books, and publish in major academic journals. The Center has offered a wide range of popular and respected services, including a lecture series, which brings distinguished Indian authors, scholars, intellectuals and social activists to campus, and a performing arts series, featuring concerts by some of India’s finest artists in music and dance. Through its many publications and hundreds of outreach programs, the Center has helped schools and school districts, colleges and universities, museums and public libraries, radio and television stations, local governments and ethnic organizations to disseminate authentic knowledge about India.

“The Center is an academic success story and a proud community asset,” says Shikaripur N. Sridhar, Founding Director of the Center and a SUNY Distinguished Service Professor.  The Center’s major publication, Ananya:  A Portrait of India (1997), edited by Professor Sridhar and Dr. Mattoo, is a major reference volume on Indian civilization, with 40 chapters by leading intellectuals and authorities on India.  In 2004 the Center was a principal advisor to the hour-long PBS documentary Asian Indians in America. “Many communities across the nation are trying to launch similar India Studies programs in their universities and think of our Center as a model, and asked us about our ‘secret.’ I always tell them our strength is our community of stalwart supporters who share our vision.”

“Dr. Mattoo is a highly respected leader of Indian American community,” said Professor Sridhar.  “He is not only a successful medical administrator and philanthropist; he is a Renaissance man, a true gentleman and a scholar. He embodies the finest values of India and America.  We are privileged to have the enlightened leadership of Dr. Mattoo and our team.”

About Dr. Mattoo
Dr. Nirmal K. Mattoo was born and educated in India. He received his medical degree from the University of Delhi in 1967, completed his residency in internal medicine and fellowship in nephrology in New York. He is a founding partner of Mattoo and Bhat Medical Associates, PC, one of the largest nephrology practices in New York.  He is also co-founder and owner of Atlantic Dialysis Management services, the largest private dialysis provider in New York State.  He was also CEO of Wyckoff-Heights Medical Center and co-chairman of Chief Medical Officers’ Council of the Columbia Presbyterian system.  He has served as Chairman of the Board of Trustees of the major national organization, Association of Indians in America.  He is co-editor of the reference volume, Ananya:  A Portrait of India, and has been featured in a PBS documentary, Asian Indians in America.  He has been honored by many organizations, including the Boy Scouts of America, the association for the Visually Handicapped, American Association of Indian Social Workers, and the Association of Indians in America.