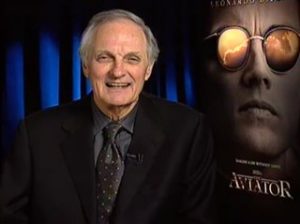 This spring, Stony Brook’s Alan Alda Center for Communicating Science and the Stony Brook Film Festival will offer a five-film festival of classics personally selected by the acclaimed actor, author and activist Alan Alda, himself.

The films, which will be available to stream May 20 – 23, include Same Time, Next Year, The Four Seasons, Sweet Liberty, Crimes and Misdemeanors and The Aviator. Alan Alda will introduce the films and recount stories and memories from the different movie sets.

“It’s a treat to be working with the Stony Brook Film Festival and the Center for Communicating Science on this project,” said Alda. “I had a lot of fun making these films. It’s wonderful to be able to share them and some of the stories behind them in support of science communication, which is something that we need now more than ever.”

The films showcase a portion of Alda’s 60-year career as an actor and his versatility as a storyteller. In addition to playing major roles in each of the films included in the Festival, Alda also wrote and directed Sweet Liberty and The Four Seasons.

“It’s always an honor to work with the great Alan Alda,” said Alan Inkles, director of the Staller Center and Stony Brook Film Festival. “I’m always inspired by his career and work ethic and I was thrilled to be asked to participate in this Festival.”

The films are offered chronologically based on their release dates to showcase the natural progression of Alan’s acting, writing and directing skills throughout the decades of his illustrious career.

Proceeds from the festival will support the Alda Center for Communicating Science, which offers professional development and graduate programs to researchers to help them learn to effectively share their work and engage with others. In collaboration with the Stony Brook School of Communication and Journalism, Alda co-founded the Center in 2009. The Center has worked with more than 15,000 scientists and researchers around the country and internationally.

Since the pandemic began, the Center has expanded its programs for professionals, designing robust and extensive online training programs, and launched a new Master of Science in Science Communication program, designed to create a new career path in professional communication for individuals with STEM backgrounds.

All Alda Center programs are designed using the latest academic research and created using a rigorous process of evaluation and assessment. The Alda Center has become known as the leading science communication organization in the nation.

“Art and science help us to explore the world around us, engage with new ideas and make life more vibrant for us all,” said Laura Lindenfeld, executive director of the Alda Center, dean of the School of Communication and Journalism and vice provost for academic strategy and planning. “Alan Alda’s long-standing passion and support for both inspire us at the Alda Center and at Stony Brook in general, to ask questions, discover new knowledge and share it all with those around us.”

Passes to the film fest are on sale now. Each film will be available to passholders via a unique link and passcode for 72 hours.