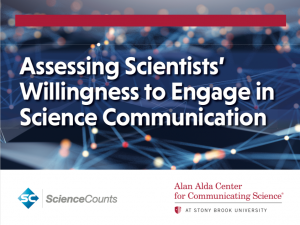 Many U.S. scientists say they are eager to share their work with the public, but feel ill-equipped to do so, according to a recent study.

Scientists surveyed said they were the most eager to share their work in face-to-face presentations, for example in a public talk or demonstration. Scientists also said they felt a strong desire to inform the decisions of government policy makers and elected officials, and that they wanted help from their professional organizations to do so.

“Society benefits when scientists share their knowledge with elected officials, the media and the public,” said Dr. Laura Lindenfeld, executive director of Stony Brook University’s Alan Alda Center for Communicating Science, and one of the study’s co-authors. “Now we know most scientists are eager to share what they know, and organizations like the Alda Center can help to empower them further.”

The survey, conducted by researchers from three universities and a non-profit organization, is the most comprehensive assessment of scientists’ views of public engagement to date.

The study also began to explore scientists’ emotional connections to their work compared to the public. According to a previous study by ScienceCounts, the public equates science with hope; Americans care more, for example, that scientists are working to cure Alzheimer’s, and less about the processes being used to do it.

Scientists, in contrast, have different reactions. In the new study, 43 percent of scientists said they feel “joy and excitement” when they think about their work; another 38 percent responded “hope.” Those who said they felt joy and excitement might be more motivated by the processes of science – conducting experiments and research, while scientists who said they felt hope might be motivated by the payoff of science – discovering a cure or answering questions.

“If, in fact, scientific curiosity comes in two different flavors – the process-minded and the payoff-minded, we may have a key to helping scientists communicate more effectively,” said study co-author Dr. Chris Volpe, executive director of ScienceCounts, a nonprofit organization that works to foster greater awareness of science. “This could have a profound impact on science communication training programs.”

The study found correlations between those responses and scientists’ fields of study. Natural scientists, such as physicists, biologists and geologists, are more likely to equate science with joy and excitement, while engineers and social scientists are more likely to respond with hope. The study authors suggest that, in addition to an emotional connection, this response may provide clues to scientists’ motivations.

More than 4,000 U.S. scientists responded to the study, which was spearheaded by ScienceCounts and the Alda Center, and included researchers from Michigan State University, the University of Texas at Austin, and the University of Wisconsin, Madison.

“This is just the beginning; this research has made us eager to continue exploring the difference between scientists’ motivations to do their work and the public’s motivations to learn about it,” said Lindenfeld, who also serves as interim dean of SBU’s School of Journalism. “In time, this could have a significant impact on how science-communication organizations help scientists distill their work clearly and vividly to benefit the rest of us.”

The study was conducted with generous support from the Chan Zuckerberg Initiative, the Kavli Foundation, and Burroughs Wellcome Fund.