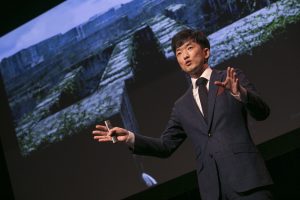 Months of preparation came down to 10 minutes on stage in front of an audience and a panel of judges. Four scientists were competing for Stony Brook University’s Discovery Prize, worth $200,000 to support their research.

The scientists, all young SBU faculty, were polished and professional; their presentations were crafted, and delivered, to help a general audience understand their complex research.

Though the presentations seemed effortless, they were the result of years of scientific research and many hours of one-on-one coaching from Stony Brook’s Alan Alda Center for Communicating Science.

“As scientists, we are very personally connected to our science. Because we spend so much time face-deep in it and it is such a fundamental part of who we are, we forget that our interest in this work isn’t clear to other people,” said Dr. Melanie Chiu, an assistant professor in the chemistry department, and one of the four Discovery Prize finalists. “The Alda Center helped me to think of the overall structure of my presentation and to remember that the way to connect with people is to share why this research is so interesting to me.” 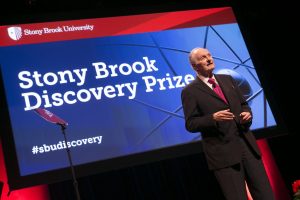 The Alda Center has been a partner in the Discovery Prize since it was established in 2013 with generous support from the Stony Brook Foundation. The competition is hosted every other year, and each time, Center founder and actor Alan Alda gives a keynote address about the importance of science and science communication.

“As research becomes more interdisciplinary and funding sources change, scientists will need to communicate to a variety of audiences – and these contestants are off to a great start,” Alda said. “These young researchers have a lifetime of discovery ahead of them, and with a grounding in empathy for their audience, we now have a better chance of understanding their important work and impact.”

The finalists discussed their efforts to make molecules replicate themselves efficiently; to regenerate kidneys in a lab; to convert atmospheric carbon dioxide into useful chemicals; and to help a comatose patient wake up.

Dr. Il Memming Park, an assistant professor of neurobiology and behavior, won the competition with his description of a comatose brain as being stuck in a maze. In a comatose patient, brain activity is reduced and generally confined to producing stereotypical patterns. His funding proposal discussed his lab’s ongoing efforts to directly stimulate the unconscious brain to help it find a way to wake itself up – the escape from the maze.

“All of my research involves a great deal of mathematics, so I want to explain all of the math. The Alda Center training taught me that’s not the point of a public lecture,” said Park. “My coach helped me see that if I wanted to connect to a person who isn’t in my field, the conversation is about the emotional connection rather than the science of ‘Here is this incredibly complex equation that I added to; look at it now.'”

To help the four finalists prepare for their high-stakes 10 minutes on stage, Alda Center faculty spent several hours with each candidate, helping them to focus their presentation on the significance and potential meaning of their work.

“My job as their coach was to help them to mine for what was salient about their work, why they care, and then put into words why the audience should care,” said Lydia Franco-Hodges, an improvisation lecturer with the Alda Center, who coached several of the competitors. “I loved watching the unfolding of their thoughts as they saw something in a new way and in a way that resonated with the audience.”

“This was an exciting team effort from the Alda Center improv team,” Franco-Hodges said. “We were thrilled to work with these four inspiring and innovative minds.”