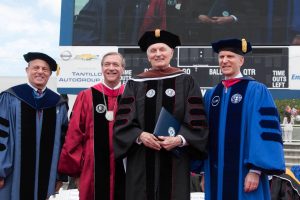 When Alan Alda received his honorary doctorate of fine arts at Stony Brook University’s 59th commencement May 24, he exhorted the more than 7,500 graduates to look deep within themselves to find what will motivate them throughout their lives and careers.

“If you bring to the surface your own dream – your own thing that motivates you, that makes you want to help other people that is born from your sense of generosity – the work you do to accomplish that dream won’t seem like work,” Alda said. “As you embark today, fortified by this knowledge that’s been passed on to you by Stony Brook University, keep searching, keep looking, keep going deeper.”

Alda was one of three to be awarded an honorary doctorate at the ceremony at the Kenneth P. LaValle Stadium. Each of the three awardees, he said, had something in common: They were being honored because they dug deep and brought some unknown knowledge to the surface and, in doing so, helped to make the world a better place.

Tarana Burke, founder of the “Me Too” movement, helped to start a national conversation and gave people the courage to come forward with their own stories of sexual harassment and assault.

Greg Marshall, an internationally known animal conservationist and SBU alumnus, invented the “Crittercam,” a non-invasive camera that has given humans unprecedented access to the behaviors of dozens of species.

Stony Brook awarded the honorary degree to Alda, said university President Samuel L. Stanley Jr., in honor and recognition of his career as an actor, director, writer, and for his advocacy for science communication and women’s rights.

Alda, founder of the Alan Alda Center for Communicating Science at SBU, was there, he said, to represent the Alda Center, which trains scientists, health care professionals and others to use empathy to communicate knowledge and experience with other scientists, policymakers and the public.

“What we’ve brought to the surface is something every human needs to bring to the surface – empathy,” said Alda. “Everything that we all do can benefit from this. Just think: in schoolyards, bullying could go down; the tensions that lead to war could go down. I know this is an ambitious thought, but we’ve seen it changing people over and over again. This idea can spread.”

Alda said his dream of encouraging empathetic communication around the world grew out of the other dreams and ideas he has pursued over his 60-year career.

He encouraged the Stony Brook graduates to find their dreams, and to pursue them with joy and commitment, but also to “stay loose.”

“I hope that you graduates today find what’s under the surface in your life, if you haven’t found something yet down there that’s motivating you, a dream of your own,” he said. “And you may find – as I found – that the dream you start out with can morph into some other dream and then another dream after that. Every path leads to another path.”